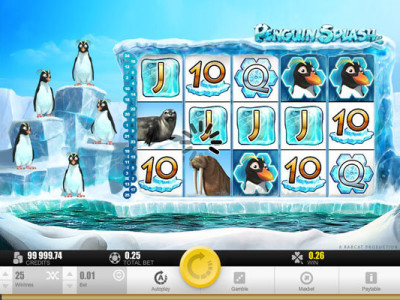 Penguin Splash is a pokie that is brought to you from the Austrian gaming developer, Rab Cat. Rab Cat Gaming is well known for Castle Builder, which is one of the unique pokies out there. This game is fun and exciting, but it comes with irritating sound effects, which is the chirping of the Arctic penguins that players are going to join. The easy solution to this problem is to mute the sounds, or if you are a penguin lover, you might enjoy that chirping sound.

The game is fun to play, but it is not that innovative, as it follows the same gaming interface and layout of Rab Cat gaming pokies. Nonetheless, the game is appealing, and it has a very attractive RTP which is equal 97%. The game’s biggest prize is equal 2000 coins, which is given by 5 Dolphin symbols. There is also the gamble game that would allow players to double up their winnings.

No introduction is needed for such a game, as from the moment players open the game they are going to quickly notice the theme of the game. They will see that the game takes them to the Arctic where they will join a group of cute penguins as they splash into the ice cold water as players claim plenty of rewards and prizes. Players will get to check out this game right here for free by placing demo credits.
The game has great visual, but I cannot say the same about the sound effects. The game also comes packed with great line payouts as well as bonus features that players will be able to take advantage of during the game play.

The game has a five reeled format that has a total of twenty five win lines that players are going to place their wanted bets on. These bets are placed under the reels. The game invites players to take a wild trip into the arctic where they will join a group of cute and funny penguins in their natural habitat. They are sitting on blocks of ice taking turns to jump into the ice cold water. So Rab Cat Gaming is inviting players to place bets, spin the reels and watch the penguins as they jump so they can claim plenty of rewards, whether through the line pays of the game, or the bonus features of the game.

Players can count on the game to provide them with a wide betting range. The game has a betting range that varies between 0.01 and 50, thanks to the 2 betting variables of the game, the coin size (0.01 to 2) and the number of active lines (1-50).

When it comes to bonus features, Penguin Splash by Rab Cat excels with flying colors. The game has a wild fish symbol that would replace all none special icons on the game’s reels to help players in getting paid. There is also the scatter penguin, three of the scatter penguin symbols would trigger free spins in which the penguins on the ice blocks will take turns jumping to reveal the multiplier.