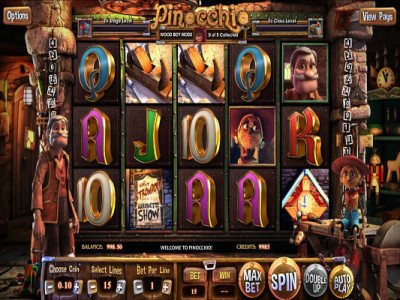 We all know the story of Pinocchio, the wooden kid that was created by a carpenter and was alive and always wished to become a real boy. A story that was told to us as children, and we also knew that when he lies, his nose would get longer and longer. Due to popularity of this story, and the nostalgia it holds over us, Betsoft Gaming has decided to build a game that is all about the story of Pinocchio and how he pursues his dreams of becoming a real boy, and with the help of you and other players, his dream will come true; when that happens, the entire gaming interface of the game changes to the Real Boy mode. So get ready to enjoy a great gaming experience and join the dreams of the wooden boy as he pursues being a real kid.

An introduction is not needed for such a game, because as apparent from the title that Betsoft Gaming has chosen for the pokie, it is obvious it is about the children’s story that we all know about a wooden boy that was created and had life. The boy always dreamt of becoming a real boy, and this is exactly what players are going to do, help the boy accomplish his dream.
Players will get to try out this game and join Pinocchio and his creator for free right here by placing demo credits. Then, if they like the game, and they will, they will go to online casinos and place real money bets on the game.

The game has a 5 reeled setup that hosts 15 lines. Since the game is powered by Betsoft Gaming, it means that the game comes in 3D visuals and symbols that would turn into animations when becoming a part of a winning combo. Not only that, as players will see Pinocchio and his creator on the 2 sides of the reels as they will react to the game play and celebrate big wins with players. The game itself is set in the workplace of Pinocchio’s creator with wooden planks and tools all around. As for the symbols, they include the creator, Pinocchio, the Real boy Pinocchio, a wooden clock, Carpentry tools and poker card symbols.

The game has three worlds, the workshop, the class room and the stage. They come with different features that can be viewed at the paytable of the game. Other than the different world, the game also comes with two modes, the wooden boy and the real boy mode, with each change, the entire visuals and layout of the game would change. The game comes with many special features, free spins and more. Therefore, players are guaranteed a high paying and a fun ride.