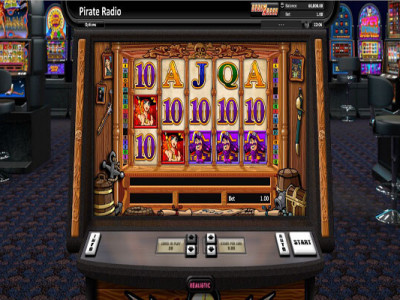 Pirate Radio is a 5 reeled machine that is powered by one of the prominent names in the industry of online gaming, Realistic Games. The game offers players a fun twist on the usual pirate theme. As players will join a group of pirates who have their own radio channel. So while they are looting other ships and searching or treasures across the seas and the oceans, they also transmit some sick songs over the radio. So players better be ready for an action packed unique gaming experience that comes full of great rewards that they can claim. Players can check out the pokie here for free without making any deposits before they start playing the game for real cash.

If you are a fan of pirate movies, then you will certainly enjoy this pirate themed pokie machine by Realistic Games, the game offers players the chance to join a crew of pirates as they roam the seas and the oceans looking for fortunes and treasures. That is not all, as these pirates have a good taste in music that they have their own radio channel. This is why the pirate skull symbol that the pirates are known for, has a headset on, which is the symbol of their radio channel.

The game has many winning chances and multiple special features that players can view with ease by opening the payouts page of the game by clicking on the INFO button.

Pirate Radio has the looks of a classic slot machine, as players will see that the game has 5 mechanical looking reels as they come similar to the traditional machines that players used to enjoy at casinos and pubs. Players will even see that the control panel buttons that are found underneath the reels come in the form of back lit manual looking buttons like classic machines. There is also the Reel 2 reel feature that does not affect the game play, but the way players see the machine. They can click on it in order to zoom in on the reels to see them up close, or to zoom out to see the entire machine as they see the entire casino floor and the surrounding machines on the same floor.

The game has 19 wager lines and all of its symbols are inspired by the theme as they include different pirates, guns, a treasure chest as well as the pirate skull with a headset on.

The pirate skull symbol is the wild icon of the game that has the ability to substitute for other pirate icons and poker card symbols across the reels and the lines of the game to help players claim a prize. The treasure chest that is filled with gold is the scatter icon of the game that can give out scattered rewards that will be multiplied by the placed wager. Also, a minimum of three scatters are needed to trigger the free games feature.