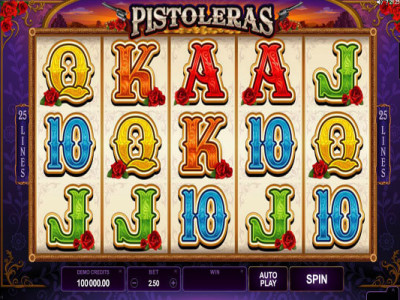 Pistoleras gives players the chance to travel to the wild wild and enjoy the company of a group of gun carrying dangerous ladies who know how to keep everyone in line. Players will also get to enjoy an action packed journey that is highly rewarding and fun at the same time. Pistoleras pokie can be played right here for free, as the game is offered here with endless demo credits before players can head to any of the recommended online casinos to give a game a try with real cash so they can capitalize on the many winning chances and bonuses that the game has so they can earn real cash.

Welcome to the world of the Pistoleras, which takes place in the Wild Wild West where everything was governed and ruled by the gun. Unlike other Wild West themed games and movies, the game is not about a brave cowboy sheriff, it is about a group of dangerous ladies who know how to handle a gun who wreak havoc in the old western town while giving players plenty of many chances of earning amazing rewards.

Pistoleras is a 5 reeled pokie machine that has an amazing theme, which is action packed and full of rewards, as it brings players into the Wild Western world that is full of surprises and most importantly, the hot ladies that know their way with a gun. The game has a total of 25 lines, on which players will place their wanted bets. Also, on these lines, players will see the wild western themed symbols that create the theme of the game and the experience. These symbols include guns, the dangerous Pistoleras, the logo of the game, the scatter money bag and the scatter coach among other icons.

The game has a wide betting range that players will surely like, which varies between 0.25 and 100 credits for each single spin. This is because although the 25 paylines are fixed, players will still be able to determine the number of coins that they wish to place on each of the lines (from 1 coin up to 10 coins), as well as the value of these coins which varies between 0.01 and 1 credits.

Players will be able to determine the bet and go through these betting options under the reels of the game through the Bet cell.

Since the game is powered by Microgaming, it comes packed with plenty of bonus features and special symbols. For starters, there is the logo of the game which stands for the wild icon that replaces other icons. There is also the scatter money bag that will trigger the Saloon bonus when 3 of them land on the reels. Lastly, there is the free spins round that is triggered by 3x scatter coach symbols.