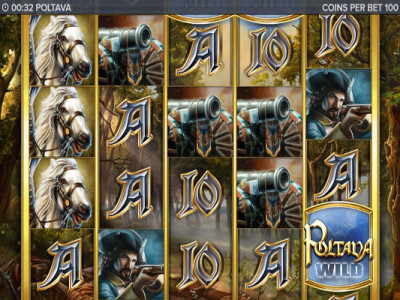 Poltava Flames of War is an epic gaming experience that players will never get enough of. The game has a 5 reeled setup that offers players an amazing action packed theme that takes them deep into the great war between the Swedish and the Russians who were led by none other than Peter the Great. The game’s visuals, sounds and features depict the flames of war perfectly, that it will leave players mesmerized and thinking of the game hours after they have stopped playing.

The game comes packed with a great set of winning chances that players can claim during the game play all of which can be viewed at the Cup shaped paytable button. The best thing is that we offer the game right here for free so players can get a taste of what the game has to offer prior to placing real bets.

Poltava Flames of War needs no introduction, as players will sense the epicness and the quality of the game from the moment they open the game. They will hear a dreadful voice narrating the cruelty of war and asking players if they can help end the war. The war in hand was won by Peter I of Russia, who is also well known as Peter the Great. Players will join the war, and help end it while claiming their own share of the loots of war by spinning the reels of the game.

The theme of the game is epic and action packed, as the pokie takes players deep into the war between the Swedish Army and the Russian Army, led by Peter the Great. The game is more focused on the battle of Poltava, which was the decisive win for the Russians that secured victory in the war. The game has a 5 reeled setup that comes hosting a total of 32 wager lines across which can claim plenty of rewards.
The game’s visuals are inspired by the war theme of the game as they include a cannon, the cavalry, infantry, the Poltava wild logo, and Peter the Great himself. All of the visuals come in outstanding graphics that help create the epic theme of the game for quite an immersive experience that is like none other.

The game’s betting range is fixed with set betting values. The betting range varies between 0.20 and 100 credits on each single spin of the reels.

The game has a wild icon, which is the Poltava logo of the pokie. This wild is going to help players get a payout by replacing all other icons, except the bonus Golden lion head. This wild will replace the symbol that can result in the biggest payout. As for the Golden Lion head, three of them would trigger free spins, with the golden wild head appearing during the bonus turning into sticky wilds and triggering extra free spins.