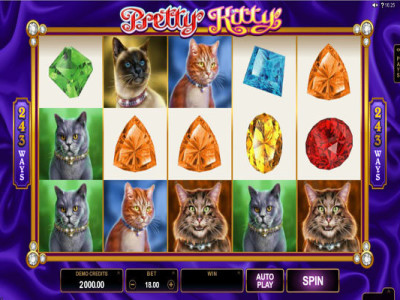 Pretty Kitty is one of the latest online pokie machines to be released by one of the biggest gaming developers in the industry, Microgaming. Although the premise of the game and its theme is not that new, as it is about felines, but Microaming still manages to create a unique gaming experience that players will not get enough of.

As the usual, the game comes packing a lot of wining chances (243 ways to win), as well as special features and icons that would make the players’ stay at the game worthwhile. Check out the pokie right here for fun with demo credits prior to placing real money bets on the game at any of the online casinos that host the game for real. You can find some recommendations for the online casinos on the right side.

Pretty Kitty is a Microgaming powered pokie machine that was just released to the market a few weeks ago. The game, as the title shows, is about cats and kitties. This is why the game would appeal greatly to cat lovers. The game has a glamorous feel to it, which will be apparent for players from the moment they open the game and start spinning its reels. All of the visuals come in wonderful quality, which is something to be expected from a Microgaming pokie. It is also packed with different features that would guarantee players a lucrative gaming ride, which would also have them coming back for more. The game is also quite easy to play with a clear control panel that makes this a smooth experience that is like none other.

Pretty Kitty has a self explanatory name, as the game is all about our feline friends, the pretty cats and kitties. This is why as soon as players open the game and start spinning its 5 reels , they will see that the different icons landing all over the reels are pretty different colored kitties. There is the white cat, the black cat, and more. Other than the cats, there are many precious stones and gem icons that add to the glamorous theme of the game. They include rubies, diamonds, golden gems, sapphires and emeralds.

These symbols would appear on the 5 reels of the game, and across the 243 ways to win that the pokie has. As for the control panel, it is located underneath the reels where players will place bets, control the game play and more.

First of all, there are 5 different cats, each cat can appear stacked on its designated reel to help players in creating winning combos. There is also the glamorous wild logo of the game which can substitute for all icons, with the exception of the other special icon, which is the scatter diamond car collar. This scatter collar can trigger the free spins round when 3 at least land anywhere on the reels. Players will claim 15 free spins with stacked wilds.