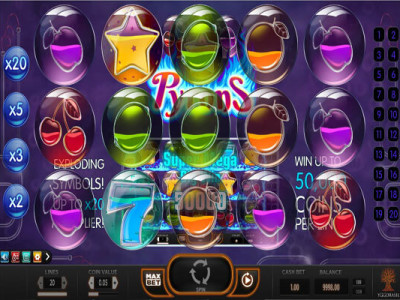 Pyrons is one of the latest games to be added to the amazing gaming portfolio of Yggdrasil Gaming. The game is themed around fruits, but these are not your regular classic fruits, they are fruits that are energetic, on fire and can give plenty of rewards. Players can claim these rewards whether through the 20 lines that the game hosts, and through the Cascading reels feature that it offers. The game is one of the free slots that we host here, so players can get to enjoy what Pyrons has to offer right here for fun by using demo credits. This would allow them to give the game a test drive before they start placing real bets on the game at any of the online casinos that host it.

Yggdrasil Gaming is really starting to carve itself a great reputation for releasing exciting pokies that come with many winning chances and unique themes, and this includes the free pokie that we have here, Pyrons. Pyrons has a very hypotonic quality that makes the game quite enjoyable. The game has wonderful visuals and the pace of the game play is quite fast and simple so players can earn many winnings in a short time. All that players will need to do is get a winning combo as they spin the reels, and the Exploding Symbols feature will take care of the rest.

This Yggdrasil Gaming powered pokie has 5 reels that host a total of 20 lines. The game is all about energy filled and fiery fruits that are created in a science lab, that come in advanced visuals that can give players plenty of rewards. Pyrons is one of the Cascading Reels slots, which is pretty similar to some top games like Starburst and Gonzo’s Quest.

The symbols that are going to be landing and spinning across the reels and lines of the game include cherries, apples, oranges, plums and other fruit as well as stars and sevens. All of these symbols would appear inside of glass bubbles.

The game’s betting range is created as a result of the betting options that the slot holds. These options can all be found at the control panel underneath the spinning reels. They include how many lines players wish to activate and the value of the used coins. The resulting betting range lies between 0.01 and 40 credits for each spin.

The game has only one feature, which is the Exploding Symbols feature, which is pretty much like the Cascading reels feature at other games. This means that whenever players manage to create a winning combo of matching symbols, these symbols will explode, and new ones will cascade from above to fill their place. This will keep happening as players keep creating winning combos and with every consecutive win, a multiplier is going to be triggered which would increase as the number of wins increase.