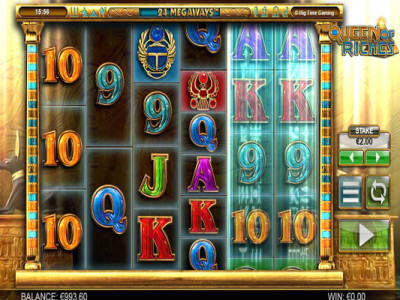 Queen of Riches is a Big Time Gaming powered pokie machine that lives up to the hype of its name. This is because the game invites players to join the Queen of Riches in ancient Egypt as they get to claim their own share of these fortunes as their own. Players will be able to do just that by placing the bets and spinning the reels of the game to form winning combos and triggering the reel features of the game. Best part in all of this, is that the pokie can be played right here for fun as we offer it with demo credits, this gives players the ability to check out the game before playing it with real money at online casinos that offer the game.

Queen of Riches is a video pokie game that is powered by Big Time Gaming, also referred to as BTG. The game has a unique setup as it has the mega Ways payout function. The game is themed around ancient Egypt as players join the Queen of riches in a high paying experience. The game is presented in amazing visuals accompanied by great sound effects that will help immerse players into the theme of the game for a satisfying experience. The game has easy controls that are found on the right side of the reels, where players will spin the reels, place bets, configure the auto play function and more.

Queen of Riches is a Mega Ways slot by BTG, which means that it hosts a total of 11649 ways to win. These ways to win are scattered across the five reels of the game, each one of these reels can hold up to 9 symbols, which resulted in the great number of ways to win of the pokie. That is not all, as symbols can appear in bigger forms in order to cover multiple positions on the reel in order to increase the winning chances for the players.

The games wagering range is determined by the single betting option that the game has, which varies between 0.20 and 40. Players will see this option at the right side of the reels as a part of the control panel.

The game has a wild icon, which is represented by the Queen of Riches herself. This wild icon can help players get a reward by standing in for the spot of the other non special icons of the pokie. This queen can expand to cover all 9 symbol spots on the reel in order to form the full Wild Reel feature. These wilds will multiply any created payout by x7. There is also the Reel Clone feature that can clone any reels at random, including the Full Wild Reel.