Rabbit in the Hat 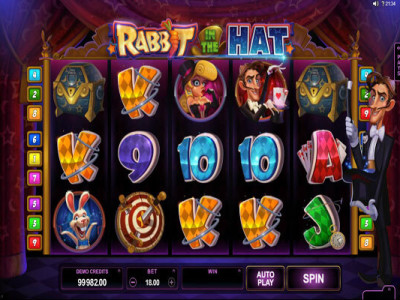 Rabbit in the Hat Pokie

Rabbit in the Hat is one of the most popular magical tricks that are carried out by magicians at magic shows. The trick is simple, the hat is empty, and then the magician puts his hand and reaches into the hat, and out comes the rabbit. This is why it is entitled rabbit in the hat. Microgaming has chosen this name for the game for 2 reasons, the first one is the fact that the game is themed around a magic show, and this magical trick in specific, which is obvious from the visuals of the game and the second reason is metaphorical, this is why players will put coins in, and rewards will come out, just like the rabbit from the hat trick.

Rabbit in the Hat is a fun pokie that has a lot to offer to players from the moment they open the game, to the moment they start playing the game, spinning the reels and earning the payouts. This is because this magic show themed slot has an exciting game play, wonderful visuals, sounds and an overall immersive gaming experience that will have players at the edge of the seat at all times, and they will surely come back for more.

The game’s theme is about a magic show and the signature magic trick of all magicians, the Rabbit in the Hat trick, which explains the name of the game. The game’s setup follows the same basics of all modern and new Microgaming pokies. It has 5 reels, with a control panel under the reels for players to control the game play and place their wagers. Speaking of the wagers, players will place bets on the nine lines that the game has. Some might say that the game has a small number of lines which means that the game is not rewarding, which can’t be any further from the truth as the game has many winning chances and bonuses.

The bonus features is one of the strong suites of this game, this is because the pokie comes with the high paying bonus feature, the Magic Hats feature. This feature can be responsible for giving out great rewards to players. It becomes active when players get the magic wild symbol under a hat, and players will earn the bonus that the hat has. There are 4 kinds of hats, they are the Cash prize Hat, Wild Reel Hat, Free spins hat and a random prize hat.