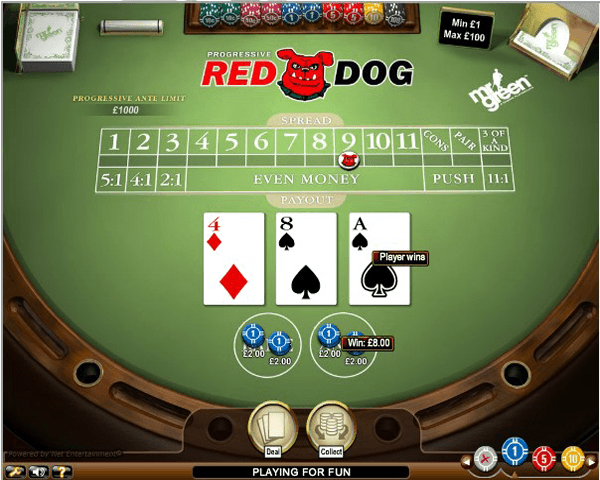 Red Dog is a card game that resembles a game of HI Lo but with different rules and dealing order. It is a game of luck as it does not involve any skill or decisions, it is all about the luck of players and the value of the cards that are dealt to them. The game is a Net Entertainment powered card game that can be enjoyed at any of the casinos that are powered by the software developers such as Mr. Green Casino among other internet casinos. Net Entertainment is known for offering games that have high quality graphics and sound effects and this game falls right under that category as players will enjoy amazing visuals and sounds that will create the perfect gambling environment for the players, starting from the green colored table to the shuffling and dealing sound.

Placing Wagers to Start the Game

Like any card game, players will have to place an initial bet to begin the game. At this game , like the poker games, it is called an Ante bet. Players will place that bet by choosing any of the three available coin sizes at the bottom right area. These coin sizes are 1, 5 and 10. The players will also notice a grey colored coin that has a red X mark on it. This coin is used to delete any present wagers to place new ones. After players place their wagers on the Ante spot on the table, they will click on deal in order to initiate the game.

On the other hand, if the cards are not a pair and they are not consecutive numbers, the game will begin. After the players get the two cards, they will be able to call or raise. If they call, they will continue the game without adding more wagers but if players think that they will win, they can raise and place another wager that is equal the initial wager. The players will win if the third card that will be dealt has a value that falls between the value of the first two cards and they will lose if it is higher than the highest card or lower than the lowest card. The payout depends on how many numbers are between the two card. For example, if there is one number, then the payout is 5:1, if there are two numbers, the payout is 4 :1 and if there are 4 to 11 numbers, it pays even money. Players who get a pair and the third card is also identical, they will be paid 11:1.