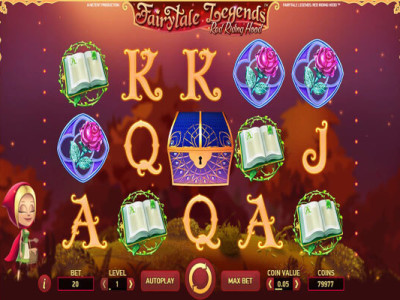 Fairytales Red Riding Hood is one of the latest games by Net Entertainment. As clear from the title that the developer has chosen for the game, Fairytales Red Riding Hood, the game is about fairytales, and it focuses specifically on the story of Red Riding Hood and the Big Bad Wolf that we all knew and read as children. Therefore, players can expect a fairy tale themed experience that is fun, and exciting. Most importantly of all, the game comes packing a lot of special features and winning chances for the players. Try out the game right here for fun, to see what the new pokie is all about prior to placing real money bets.

Net Entertainment is known for its unique and amazing new games, and this new pokie that we have here is the latest one. It is Fairytales Red Riding Hood. The game takes players on a great, highly rewarding ride that will keep them at the edge of their seat at all time. The game is fun, has amazing visuals and comes packing a great set of bonuses and features. All of this guarantees players an unforgettable ride.

Fairytales Red Riding Hood is a five reeled game that hosts a total of 20 wager lines. Across these lines, players will place their bets and claim back plenty of rewards and prizes. Speaking of bets, they can be placed underneath the reels through the wagering options. These options are the coin value and the bet level. These two options create a wagering range that is between 0.20 and 200.

The game’s theme takes players into the world of fairytales, which is to be expected from the title that Net Entertainment has chosen for the game. Players will join Red Riding Hood as she moves around the fairytale forest where she will meet the Big Bad Wolf and the fairy queen. The symbols appearing on the reels include the Big Bad Wolf, the fairy mother, gemstones, flowers, the logo and more. They all come in great visuals to immerse players into the fairytale story of the game. In addition, the reels are located in the magical fairytale forest where Red Riding Hood is walking. This is why the entire background will turn into an animation of Red riding Hood taking a few steps with every spin.

Red Riding Hood is the main character of the game, and it is also the wild symbol. This means that whenever it appears on the reels, it is going to help players get paid. It can appear on reels, 2, 3 and 4 only to replace other icons. If 2 or more appear, they can trigger the Sticky Wild Re Spin, as they become stuck and trigger a re spin on the reels. The game also has a bonus round that is triggered by 3 bonus treasure chests icons. Lastly, there are 3 different bonuses that can be randomly triggered during the game play with the help of the fairy queen.