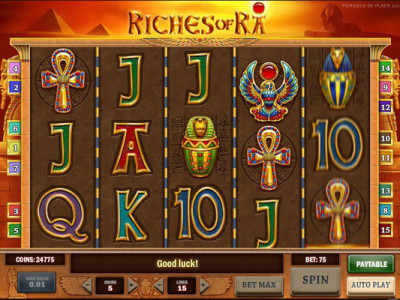 Riches of RA is a 5 reeled, Egyptian themed video pokie machine that is playable from 15p, which creates a wide betting range for all players to enjoy. The game has a Pick a Prize bonus through which players can claim up to 150x the placed bet. The game also has free spins that can give up to 15 spins with 2 reels being totally wild.

Apart from the bonus features and free spins, the game is quite generous through its line pays which gives players the chance to claim their own share of the great Ancient Egyptian fortunes of RA, which explains the title that Play n Go has picked for the game, Riches of RA.

Riches of RA is an Egyptian themed pokie, with it, players will let the falcon headed god of the sun bask them in his amazing riches as they spin the game’s reels and hope for stacked wilds or triggering the bonus round of the game so they can start earning the great rewards that the game has. So get ready to travel deep into the Ancient Egyptian sand filled lands or a chance to earn your own share of the great golden fortunes and riches of RA.

The game has a setup of 5 reels, which is a pretty basic format for most Play n Go powered pokies. The game’s reels host a total of fifteen bet lines. Across these lines and reels, players will find plenty of Ancient Egyptian themed icons and visuals. In fact, the entire game is themed around this theme. This is why the 5 reels of the game are located in the hot sandy desert of Egypt, with the Sphinx and the pyramids in the back on top of a hill.

The Ancient Egyptian theme of the game does not only affect the backdrop of the reels, as the symbols that are going to be landing on the reels of the game include a Pharaoh’s golden mask, an ankh, a blue scarab, the Falcon Head of the God RA and poker card symbols.
The Wagering Range

The game hosts 3 betting options that players will find underneath the ancient Egyptian reels of the game. These options are the number of lines, number of placed coins on each active line and value of these coins. This results in a betting range that lies between 0.01 and 18.75 credits.

The God RA, whose players are trying to bask in his riches, is the wild icon. He will use his godly powers in order to replace other icons on the game’s reels to help them get paid. Also, when RA appears stacked on the 1st and the 5th reel at the same time, this will trigger the free spins round to give players 15 free spins with the 2 wilds reels sticking in their spot. The bonus icon of the game is the miniature golden statue. Three of this symbol would trigger the bonus feature that would give players multiple rewards, up to 150x the placed bet through a pick me kind of bonus.