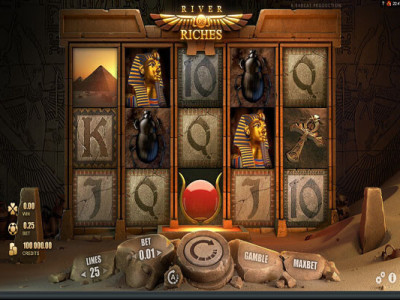 River of Riches is a 5 reeled pokie game that is full of rewards and fortunes, which is not a surprise, given the name of the game, River of Riches. The game also comes from the gaming portfolio of Rab Cat Gaming, which is well known for its wonderful set of games that come with unique and exciting themes. This game in particular takes players on a wonderful ride into the Ancient Egyptian Civilization so they can claim their own share of the River of riches that this civilization and its Pharaoh Kings were known for, which explains the title of the game.

Do you ever wish you can find a River of Riches that you can swim in and claim as much of these riches as you can? If the answer is yes, then this is the video pokie that you are looking for. River of Riches by Rab Cat will allow you to travel back in time to the times of Ancient Egypt where you can join their Pharaoh Kings who were known for their riches so you can get to claim them as your own. Players will do that by simply placing their wanted bets and then spinning the reels. They will earn plenty of payouts whether through the line pays that the game hosts or through the special bonus icons that the game has and their features.

The game’s setup hosts five Ancient Egyptian spinning reels that have a total of 25 lines. Players are going to place bets on these lines through the game’s betting options that are located as a part of the control panel that is found at the bottom of the screen. They will find 2 betting options, the number of lines and the coin size.

The entire game is inspired by the Ancient Egyptian theme of the game as they are set inside of a tomb in Ancient Egypt with sands and ancient statues around the reels. As for the symbols themselves, they includes an Ankh, a scarab, a tomb raider, the pyramid, the Sphinx, a golden Pharaoh mask and card symbols that come with Egyptian designs.

The game’s wagering range varies between 0.01 and 50 credits. This betting range depends on the 2 variables that the game has when it comes to betting, the first one is the number of lines (1-25) and the coin size (0.01 to 2).

When it comes to bonus features and special icons, Rab Cat’s River of Riches excels with flying colors. The first of the special icons that the game has is the wild icon, which is the Tomb Raider. This wild icon would stand in for other icons to help players win a prize, but it will not replace the scatter bonus icon. There is also a fixed wild icon, which is the fiery wild that is engraved in stone. Since the game has an Ancient Egyptian theme, the scatter icon that can trigger the free spins round is none other than the red crown jewel.