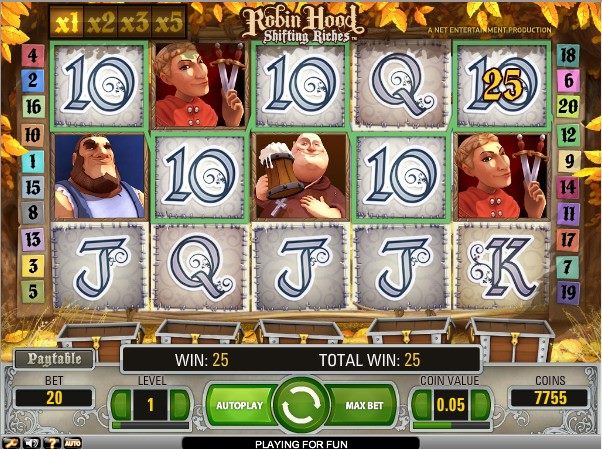 Robin Hood Is a video slot that is developed by Net Entertainment, it allows players to join Robin Hood in his good cause as he takes from the rich and gives the poor. Players will also be able to take some of these riches for themselves by accumulating winning combos or taking advantage of the very rewarding features such as Wild symbols, scatter symbols and the chance to claim a jackpot win of 5,000 coins.

Robin Hood is the urban legend of the righteous man who stole money from the rich in order to provide for the poor. Due to the popularity of this character and how people related to it, there have been movies, games and TV shows about it, and Net Entertainment decided to capitalize on its popularity by making a video slot machine that is themed around this hero, the defender of the poor. Robin Hood is a video slot machine that is themed around the hero, players can enjoy this game and enjoy the company of Robin Hood and his gang right here on Best Casinos with practice credit. Players can also can head to Mr. Green Casino or any other Net Ent powered casinos in order to try the game with real money and earn real cash.

As a Net Ent game, the game is designed in wonderful graphics to provide players with a very visually entertaining gaming experience that is accompanied by digital sound that has the same theme and soundtrack. This helps players to be invested into the theme of the game so they can enjoy the game.

The game is based around Robin Hood so players will have the chance to accompany the gang of Robin Hood in their fight against the rich so they can help the poor. The video slot creates that world and captures that theme through the design of the game, the symbols, the soundtrack and the interface of the video slot itself. All of this contributes in helping players be invested into the game’s theme. On top of all of that, players will enjoy an outstanding intro that will lead them into the game and its wonderful theme.
The symbols that players will see appearing across the games reels and lines (5 reels and 20 lines) include Robin Hood himself, members of his gang, a soldier and card symbols that are crafted in a way to fit the theme of the game. At the bottom, players will see the game’s control panel which will allow them to control every aspect of the game including specifying wagers, spinning the reels, placing max bet and more.

The Robin Hood logo symbol is wild and it can substitute for other symbols except the two bonus symbols. The Money Bag symbol can trigger the free spins round if 4 appear on the reels and during free spins, players can earn more free spins during the Free Spins Round through the Free spins symbol. The game also has the shifting reel feature which can be quite rewarding.