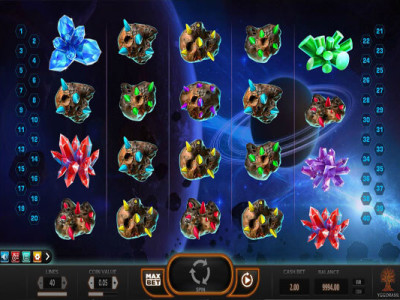 A set of vast planets that are located in some far far away solar system appears to be the exact location of this brand new and very good looking Yggdrasil Gaming slot machine. The game is entitled Robotnik, which might give you the feeling that it is about robots, but the title really belittles the scale of the game and the landscape that is shown. The game is basically a Sci-Fi game that has a very clever feature that is active during the base game, which includes the Robotnik. As soon as players open the game, they will be mesmerized by the level of details and the graphics of the game as they see a group of planets orbiting a star, much like our solar system.

Yggdrasil Gaming might not be one of the biggest names in the industry, yet, but it has a bright future ahead of it, especially if it keeps releasing brand new games like the game we have here, Robotnik. The title of the game might be a little deceiving, as the Robotnik can only appear during the bonus feature of the game. Other than that, it is all about planets. This is why players who choose to give this game a few spins better be ready to go on an interplanetary gaming experience that is full of action, rewards and excitement. The best part of all of this is that the game is available here for free for players to check out before they can place any real bets on the game at any of the online casinos that host it. We recommend some of them here on this page.

Robotnik has a 5 reeled format that has a great number of lines, 40 bet lines. Under the spinning and interplanetary reels of the pokie, players will find the control panel. Through the buttons of this panel, players will control the entire game play of the game, starting from viewing the payouts table, to placing the bets and spinning the reels.

The game takes players to a distant solar system that has its own shining star and planets. This is why players better be ready for an adventure of a lifetime as they watch these distant planets and rocks spin on the reels of the game, giving them plenty of payouts.

The game has a wild icon which is the wild orb, it can substitute for other icons. There is also the 3x wild orb that would not only replace other icons, but it would triple the regular line payout it helps in creating. Also when players get a wild icon, a re-spin is triggered with the wild stuck in its location. Lastly, there is the Robotnik feature in which a small robot might appear out of no whether during a spin or after a spin to hit symbols turning them wild to help players get payouts.