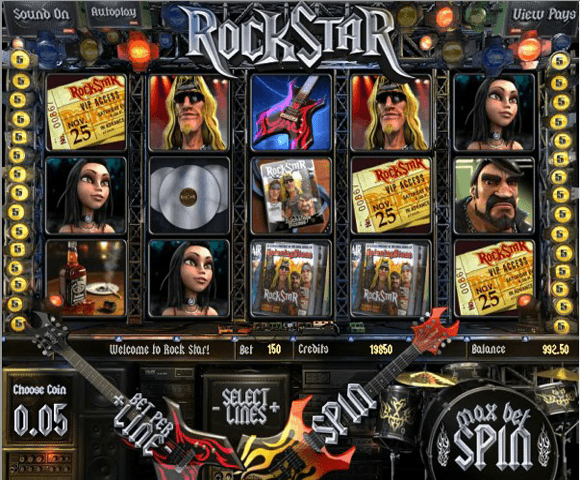 Rock Star is a non progressive five reeled 3D slot machine that is developed by Betsoft Gaming. The developer incorporated fantastically designed graphics with vivid audio effects and 3D animations in order to produce this amazing game. The game has thirty paylines and offers players a set of rewarding features and bonus rounds. The game’s symbols are all rock related such as magazines, VIP tickets, platinum records, gold records, whiskey bottles and rock stars.

Being a Rock star is dream come true for any rock fan and listener. Betsoft gaming realizes that and this is why the software developer decided to create a video slot machine that is themed around a Rock Band and it allows the players to tag along with a rock band during their musical tour. The entire game is based around that theme, players will notice that in the game’s symbols, the design of the game, the reels, the buttons, the control panel and the background music. It is a 3D video slot machine from the amazing portfolio of Betsoft Gaming. This is why players will be able to enjoy great graphics, wonderful and vivid sound effects and plenty of rewarding features and bonus rounds. All of this enables players to enjoy a very exciting and a fun filled gambling experience that is also, quite lucrative.

The game is a 5 reeled video slot machine with 30 paylines. 3D symbols are spread across these reels and paylines of the game. These symbols, especially the high paying symbols, will turn into 3D animations if they are a part of a winning combination of symbols which definitely adds to the excitement of the game. Speaking of symbols, the symbols that appear on Rockstar’s reels include guitars, rock band members, concert tickets, gold records, platinum records and a microphone among other rock related symbols.

At the bottom of the spinning reels, players will find the control panel of the game, its where they will be able to spin the game, determine their wager among other things. It is also themed around rock music as the buttons come in the shape of drums and guitars. The players will also enjoy an amazing intro that is also rock themed that will lead them right into the theme of the game.

The game has a wide wagering range, which allows low rollers and high rollers alike. This is because the minimum wager that can be placed by players at this video slot is equal 0.02 credits if players place one coin on one payline and they can place a maximum wager of 150 if they place the maximum number of coins on all of the lines. They can also click on place max bet in order to place the maximum bet at the video slot. The game’s wager is determined by three things. The first thing is the number of lines that players want to place their wagers on, the 2nd thing is the number of coins on each line and lastly, the value of the used coins.

The game has plenty of bonus features that reward players generously. These features can be found at the paytable of the game. One of these bonus rounds is the Epic Solo bonus. It can be triggered when players get three guitar symbols on the reels of the slot.