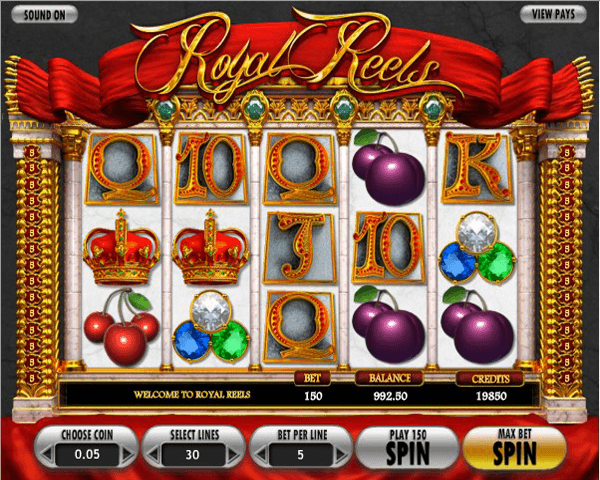 Royal Reels slot machine is a royally designed 3D slot machine that was created by the developing team at Betsoft Gaming. This game has five reels and thirty paylines. The game has a wild symbol, a multiple choice bonus game, Click me feature and a jackpot that pays out a total sum of 7,000 coins. The wild symbol of the game is the Diamond. This symbol can stand in for any other symbol in order to create a wining combo.

Royal Reels is a video slot machine by Betsoft that is dedicated to royal players. This is because the game has a royalty theme which can be noticed from the name of the game as well as the intro and the symbols that the game has. The symbols, the sound effects and the design of the game create a world of royalty that players can get immersed into without any effort. The game’s graphics and visuals are of high quality which is what players can expect from any Betsoft powered game, especially a 3D video slot. Even the soundtrack is of a very high quality and it is royalty themed to immerse players even more into the theme of the game. Players can spin the Royal Reels here for free without having to wager real money or they can spin them for real wagers at Mr. Green casino among other Betsoft casino.

The Game’s Theme and Setup
The game is all about royalty, this is why the design of the game, its layout, the symbol on the reels as well as the soundtrack are all themed and inspired by royalty. The game is presented to players in a 5 reel format with a total of 30 lines that players will be invited to place wagers on. The symbols that appear on these lines and the 5 reels of the video slot include cherries, diamonds, a crown, jewels and royally designed poker card symbols including J, Q, K, A and 10. Players will see the logo of the game at the top while they will see that the reels are jewel encrusted which adds to the authenticity of the game’s theme. When players succeed in achieving a winning combo, players will enjoy a royal music celebration and the symbols will become animated for a short time.

Players will go through the different wagering options that the game has at the bottom of the reels. These options will help them determine the final wager that they want to place on each spin on the video slot. These options also create the wagering range of the game which varies between 0.02 and 150, like most Betsoft games. The wagering options are the number of lines between 1 and 30, a bet per line and the chosen coin value that they will use to place these wagers. The coin values available vary between 0.02 and 0.50.