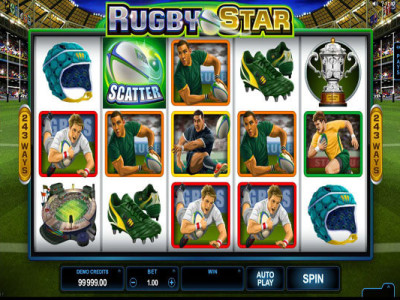 Rugby Star is one of the newest Microgaming games to make debut in the world of online gaming, and like many of Microgaming games, the slot has an amazing theme that is fun and rewarding. The game, as apparent from the name of the game is all about the sport of Rugby, this is why players will see many visuals and symbols that are inspired by the.
Play the game here for free and get to enjoy all what it has to offer right here before placing real money at any Microgaming powered online casino. Check it right here:

Rugby Star is a fun game that does not need an introduction, as it is powered by Microgaming. This means that the game has a rewarding set of reels with many special bonuses. The game is themed around one of the most popular sports worldwide the sport of rugby. This explains the name that Microgaming has chosen for the game, as well as the visuals that would appear for players during the game play. Even the sound track that players will hear during the game play, they are inspired by Ruby sport and the sound of the crowd.

The game is themed around Rugby, this is why the icons that will appear are all themed around Rugby. They include rugby players, a Rugby ball, rugby outfit, a Rugby stadium and the championship cup. The 5 reel set is located inside of the Rugby stadium right in the field, to make sure players enjoy a highly immersive and an exciting ride.
The game has 5 reels and hosts a total of 243 ways to win, which is much better than the usual paylined format that most games offer. Plus the ways to win, the game has plenty of bonus features and symbols that can reward players greatly.

The game’s wagering range is determined through the betting options. These options are located under the reel set of the slot. It is where players will determine the number of coins they wish to place, plus the value of the coins. The wagering range varies between 0.50 credits and 50 credits for each spin of the reels.

The game would not be a Microgaming slot without a minimum of a couple of special icons. The special icons that the game has are the wild icon that replaces other non-bonus icons, it is the logo of the game. The other special icon that the game is the scatter bonus icon that can activate the game’s free spins round, it is none other than the rugby ball icons. There is also the Wild Pass feature that is triggered randomly during the game play.