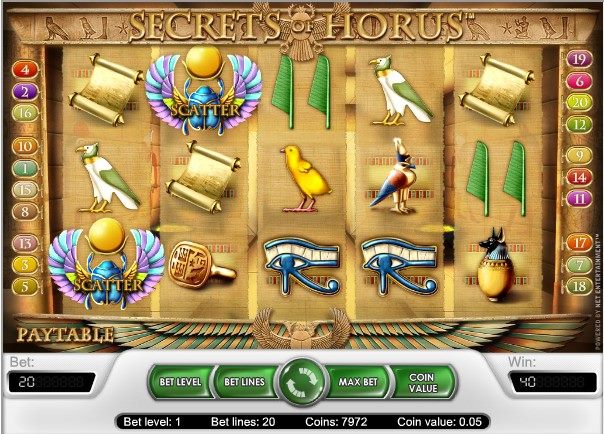 Secrets of Horus is a video slot that is developed by Net Entertainment. It is themed around the ancient Egyptian history. Hence the naming of the game, as Horus was one of the ancient gods in Egypt. This is also why all of the symbols and the control panel are all derived from that culture. It is a 5-reeled video slot game with twenty paylines. It offers players multipliers, wilds and scatter payouts alongside free spin rounds.

Secret of Horus is a Net Entertainment powered video slot machine that is themed around the ancient Egyptian civilization and the era of the King Pharaohs. This is clear from the name of the game as it is named Secret of Horus, as Horus was the name of the most popular gods in Ancient Egypt. The game invites players to go on a very rewarding and an exciting journey to the ancient times in Egypt in order to search for the hidden treasures and riches of these Pharaohs that are hidden underneath the sands of Egypt. The game is offered to players at Net Ent powered casinos such as Mr. Green Casino while players can enjoy the game here for fun without wagering real money.

The game is based around the rich ancient Egyptian civilization where the King Pharaohs used to rule over Egypt. The players will be able to go on a wild adventure to these lands in order to search for the hidden treasures and riches. They will engage into that magical world through the amazing symbols that appear on the 5 reels and the 20 lines that the game offers. These symbols include letters from the ancient Egyptian language, a scarab, Horus, Ancient Egyptian Eye and more. Not only the symbols as the design and layout of the game itself are also themed around Ancient Egypt. The reels themselves are located in an Egyptian temple with Ancient symbols and signs all around the reels.

Under these themed reels, players will see the game’s control panel that would allow them to spin the reels, control the settings of the game, view the paytable, control the sound and place the wagers. The paytable can be found at the bottom left. This paytable will show players the different combos of symbols that would make them eligible for a payout as well as the rewarding features and bonus symbols that the game has to offer.

The game offers players a list of bonus symbols and special features that will guarantee them a fun filled and a lucrative stay at the game. The wild symbol is Horus. This symbol can substitute for any symbol except the bonus scatter symbol of the game. This helps players achieve winning payouts. As for the game’s scatter symbol, it is the scarab symbol. The symbol can activate up to 16 free spins and any winnings during the free spins are multiplied by 3.