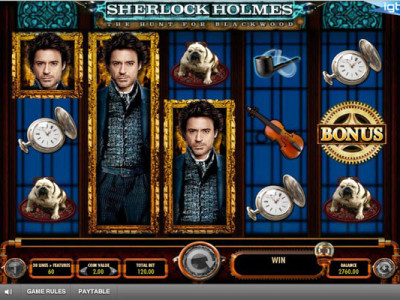 Sherlock Holmes is the world’s best detective who goes on great adventures in order to solve mysteries and crimes. If you were always intrigued by his stories, then this game, Sherlock Holmes The hunt for Blackwood is here to invite you to go on great adventures as you join Sherlock and his sidekick, Watson in what would be the gaming experience of a lifetime. As the small audio introduction says, there are always twists and turns in the way as they try to unveil the secrets and solve the mysteries of the most dangerous of crimes. The game is inspired by the 2009 movie that starred Robert Downey Jr.

Get ready for a one of a kind adventure that will take you on the hunt for Blackwood with the company of Sherlock and Watson. The game is powered by one of the biggest companies in the world which is IGT (International Game Technology). The entire game is themed around the 2009 movie, which starred Robert Downey Jr. This does not only include the visuals and the bonus features, as even the soundtrack that players in the background as players spin the reels is inspired by that wonderful movie. So get ready for an intriguing gaming experience that is packed with mysteries, secrets and great bonuses for a one of a kind gaming adventure.

These symbols will appear scattered across the 5 reels of the game and its offered 30 lines. These lines have pretty generous payouts to give to players, plus the amazing bonus features and special symbols that the game hosts.

The game has a fixed amount of lines (30 + Features) and a fixed number of coins, 2 per line. The only thing that players will control as they place the bet is the coin value which varies from 1 to 50 which means that the betting range is between 60 and 3000 credits per spin.

The game has the Mystery Multiplier Feature that can be triggered randomly during game play which will multiply any winnings earned with up to a 10x multiplier. Another randomly triggered feature is the Team Work Feature, in which all Watson and Sherlock Holms icons will combine and transform the symbols into Sherlock and Watson icons that give higher payouts. This feature can occur with the Mystery Multiplier Feature during the same spin, which can result in tremendous payouts.

Lastly, there is the golden bonus icon, three of these bonus icons on reels 1, 3 and 5 would trigger the Picker puzzle in which players will pick objects from Sherlock’s room to trigger one of many things including multipliers, instant wins or even other bonuses like the Hunt Bonus (Free Spins) or the wheel bonus.