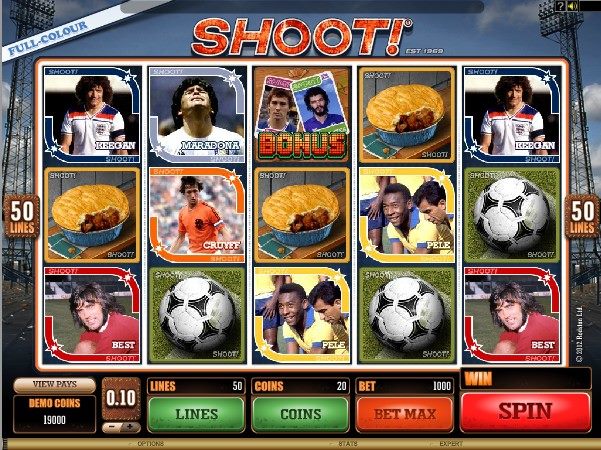 Shoot is a Microgaming powered game that is themed around the 2012 Soccer Championships in Europe. It is a five-reeled slot machine with fifty paylines. It has great features and various bonus rounds and a great wagering range that makes this gaming experience as rewarding as it is fun. Yet another great game by Microgaming.

Shoot is a remarkable video slot that is dedicated for all of the soccer fans around the world. Microgaming is the software developer behind the game which does not come a surprise as Microgaming is known for its unique video slots and unique themes. Soccer fans will enjoy this game as they will see different soccer players on the reels of the game as well as other soccer related symbols. Even the background and the music have the same theme as the reels are located in a soccer field while players will enjoy the sound of the crown in the background as they enjoy the video slot.

The game is presented in awesome visuals and comes packed with plenty of bonus features and rewarding rounds. The game can be enjoyed for fun on this website while players who want to try the game with real cash can do that at a variety of Microgaming powered casinos such as Jackpot City, Gaming club and Mr. Green casino.

As mentioned before, the game is themed around the popular sport of soccer. This is why the symbols appearing on the reels include apple pie, a wild card, a bonus symbol a soccer ball alongside well-known soccer players including Pele, Maradona, Cruyff, Best and Beckenbaur. Each player will have his name on the symbol so they can identify each players.

These symbols are scattered on the 5 reels and the 50 lines that players can place their wagers on. Under these reels and lines, players will find different buttons which represent the control panel of the game. These buttons include the max bet button, the spin button, coins bet, lines bet and the coin value. At the far left, players will find their credit as well as the paytable of the game. This paytable enables players to view all of the different combos that would enable them to claim a line payout. It will also enable them to know more about the different features and bonus round that the game has to offer.