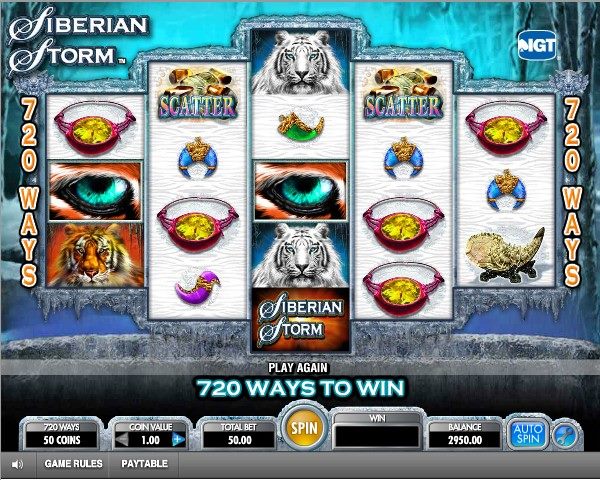 Siberian Storm is a thrilling slot game that offers players great payouts and rewards. It is an IGT developed game that has only one bonus round. This bonus round is called the Free Spin Bonus. It also has extra wilds and major multipliers in order to increase the payouts for players. It is dedicated for players who are looking to place regular bets without all of the fancy features and wagers.

Siberian Storm is a very exciting and a unique video slot machine that will take players on a very wild and a thrilling adventure to the ice mounted lands of Siberia where they will be stuck in a Siberian storm and they will have to face off and fend off the creatures that live there including tigers. This is why players will notice that the symbols appearing on the reels are all inspired by the snow mounted lands of Siberia as well as the creatures that live there. Not only the reels as the design of the entire game, the soundtrack and the features, all have the same theme. As an IGT game, the game can be found at any of the numerous casinos that IGT powers such as Mr. Green Casino. It also means that the game is of high quality because IGT only develops games of high quality. This includes the quality of the features, the visual graphics, and the sound effects among other things. All in all, the game will provide players with an immersive and a terrific gambling experience and a rewarding one as well.

The video slot, Siberian Storm, will create a world that players will be immersed into. They will go through the Siberian snow mounted world and face off creatures to stay alive. Needless to say that this makes for a very exciting and a thrilling experience. This theme and the world that it creates is very clear from the moment they open the game and see the background of the reels as they are located in a ice cavern. As for the reels themselves, they have a very special setup, the game has 5 reels but the number of horizontal rows are not equal, the middle one has 5 symbols, the one next to it has 4 symbols then the last one has 3 symbols. The game also offers players the chance to bet on 720 different ways to win instead of a limited number of lines.

The game’s wagering range depends on the coin value alone as it is the only wagering option. The available sizes include 1, 2, 5, 20 and 50, thus, making the wagering range lie between 50 and 2500.

The game is packed with bonus and special features. There is the wild symbol  which can replace any other symbol to aid players in achieving a winning combination of symbols. Players can see these combinations as well as the rest of the bonus features at the paytable of the game.