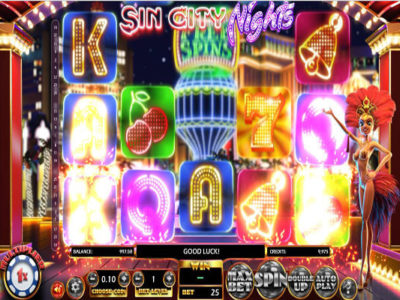 Sin City Nights is one of the newest 3D video pokie machines to be added to online casinos. The game is from the rich and amazing selection of games of Betsoft Gaming, the Slots3 Portfolio. This is why the game comes with an exciting theme, as well as amazing visuals and 3D animated icons that would surely entertain and mesmerize the players. The best part is that the game can be tried out right here for free so they can see what the game has to offer.

Sin City Nights is an amazing new game by Betsoft Gaming. The game has 3D visuals and animated icons, and it also hosts plenty of rewarding features and winning chances. This means that players who decide to give the game a few spins will not only enjoy an engaging ride, but a highly lucrative one as well. The game’s theme is quite obvious from its title.

Therefore players can expect a wild ride in the sin city of Las Vegas with its hot dancers and bright lights, while they get to claim plenty of payouts. They can do all that and enjoy the city of Vegas as they sit comfortably in their own homes. Bottom line, the game brings Vegas to the players with a simple click of a button.

The theme of the game is all about the Sin City of Las Vegas. This is why it is entitled Sin City Nights. The game invites players to travel to Las Vegas for an unforgettable ride. The game creates that theme through its wonderful 3D visuals and animated icons, as well as the sound effects. This is why players will see a female Vegas dancer appearing as a 3D animated character on the right side of the reels.

She will join players during the game play and would celebrate the wins with them.
The game has a 5 reeled setup that homes 20 wager lines. Across these lines and reels, players will find 3D icons. These icons include a golden bell, sevens, cherries, and card icons. All of the symbols come in the shape of bright Las Vegas city lights.

Since the game is from the portfolio of Betsoft gaming. Players can expect it to be packed with special icons and many winning chances, and this game delivers exactly that. The game has three wild icons that can replace other symbols on the reels to help players get paid. They are the cherry, the seven and the golden bell.

The other special icon is the scatter free spins icon. Three of this icon on an active win line will trigger the free spins special feature of the game.