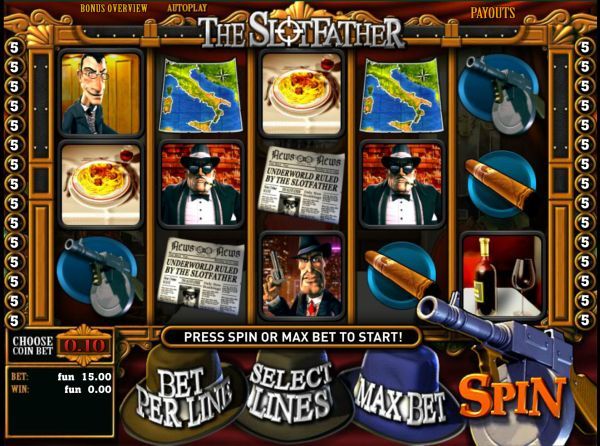 Slotfather is an amazing and a captivating Betsoft powered 3D video slot machine. The game is themed around the world of the mafia and godfathers, this is why it is named Slotfather. From the moment players open the slot machine and watch the intro, they will be drawn into the theme of the game. They will listen to an intro by the Slot father himself as he tells them how he survives and how does he convince players to keep playing the game over and over. The game is presented to players in remarkable 3D visuals, vivid sound effects and rewarding features. All of this enables players to enjoy one heck of a gambling experience at one of the best Betsoft video slot machines. This game can be enjoyed at any of the online casinos that get their games from Betsoft such as M. Green Casino.

The game has a strong and a powerful theme, the Italian mafia theme. This theme dominates the entire reels and the design of the video slot. This is pretty clear as all of the symbols are related to the Italian mafia. The buttons of the wagering area and control panel of the game are also themed around the mafia. The game is presented to players in a 5-reel and a 30 line setup like most 3D Betsoft video slots.

Starting with the symbols, they include several characters from the mafia such as the slot father himself, Frankie the fixer, Sammy quick fingers and fat tony. It also includes symbols such as stacks of money a ring, a map, a newspaper, a briefcase filled with money, a Tommy Gun, an old car, a Cigar, wine and a glass, pasta and other symbols. These symbols will transform into 3D animated symbols if they become a part of a winning combination on an activated line.

As for the control panel, the max bet and spin button comes in the shape of a Tommy gun while the bet per line, spin and choose lines buttons, they come in the shape of gangster hats. Players will also enjoy an Italian mafia themed soundtrack in the background as they enjoy the game.

The game’s wagering range is determined by three things. The first thing is the bet per line that players will decide to wager, the number of activated lines that they wish to place wagers on and the coin value that they will use.

One of the bonus features is entitled Sneaky Instant Win. It is triggered when Sammy Quick fingers and the money briefcase appear on adjacent reels. If that happens, he will extend his arm into the briefcase and throw money at the player giving him instant wins. The game also has a bonus round that is triggered if players get 3 Slot father symbols on the reels of the game.