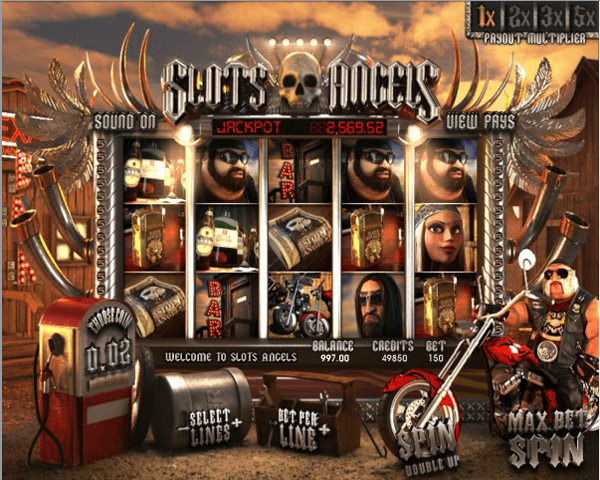 Slots Angels is a progressive 3D slot machine that has five reels and 30 paylines. This game is designed by Betsoft Gaming and it can be found at major online casinos that are powered by Betsoft such as Mr. Green Casino. The game also has a jackpot that pays out a total of 3,750 coins. The game has a Re Spin feature that offers multiplied winnings. The game also offers players a number of free spins when they get a minimum of three scatter symbols.

Slots Angels is a Betsoft powered 3D video slot that is presented to players in 3D graphics and wonderful digital sounds. This allows players to easily get into the theme of the game, which is Biker Gangs. The players will be introduced to the theme of the game through a captivating and a vivid intro that will take them right into the theme of the game. The game is also packed with a hefty sum of rewarding features and bonus symbols that would enable players to enjoy a rewarding and lucrative gambling experience at the video slot machine. Best Casinos offers players the chance to try the game for free without having to risk real money, as for players who would want to try the game with real money can do that at Mr. Green Casino alongside other casinos.

The game has a 5 reel setup that has thirty paylines that the players can wager on. The players will make the wagers through the control panel and wagering area of the game that can be found at the bottom. Once players place the wagers, they will be able to spin the reels and watch the symbols spin. The entire game is themed around biker gangs, which is clear from the symbols on the reels, the design and the layout of the game itself as well as the wagering area. For example, the symbols that spin on the 30 lines of the game include a bar sign, a bike, a biker, a lighter, billiard balls, female biker, stacks of money and a dart board among others.

As for the control panel of the game that is found under the video slot’s reels, they come in the form of bikes, bike wheels, toolboxes and gas pumpers. As for the reels themselves, they are located in front of a bar on an open road.

Like most Betsoft powered games, the wagering range of the game varies between 0.02 and 150. The bet is determined by three things, the first thing is the number of activated lines, the second thing is the bet per each activated line and lastly, the coin value that is used to place the wager. All of this can be found at the control panel of the game under the game’s reels.

Since the game is Betsoft Powered, the players would find a lot of rewarding features that would make them enjoy a lucrative experience. One of the features is the Party Free Spins feature, the lucky players will be able to trigger this bonus if they get a minimum of three bottle symbols on the game’s reels. Another bonus feature is the Darts click me bonus which rewards players with instant cash prizes if they get a minimum of 3 dart board symbols on the reels.