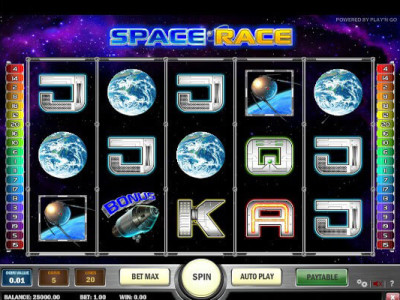 Space Wars is a Play n Go powered pokie game that takes place in outer space where players will find themselves involved in vicious fights throughout the battles of the Space Wars. The game has a 5 reeled setup, which hosts multiple lines, through which players are going to earn multiple rewards. The game is presented in state of the art visuals, sounds and of course, an immersive gaming experience that is like none other. The best part about all of this, is that players will be able to spin the reels of this game for free right here, without the placement of any real bets or any deposits.

Introduction
Space Wars is a five reeled pokie game that players can try out here for free. The game is powered by Play n Go, which means that players are promised an immersive gaming experience that is packed with many bonus features and prizes that players can claim throughout the gaming experience. The game creates this wonderful gaming adventure through the visuals of the game, the interface, the smooth game play and the sounds. This does not really come as a surprise, since the game is powered by a big name in the world of online gaming, Play n Go. So get ready to claim many rewards and enjoy a one of a kind space adventure with this pokie right here, Space Wars.

Space Wars is a multi paylined, 5 reeled slot that offers players up to 20 lines for players to place their bets on. The game has an outer space theme, which is pretty obvious from the name of the game, Space Wars. The game takes players to the vast universe where they will find themselves in the middle of a space war between different space armies with space ships and everything. The game creates this wonderful ride through the visuals of the game that are clearly dominated by the theme of the game.

This is why players will see that the 5 reels of the game are located in the backdrop of outer space. As for the symbols, they include moons, planets, stars, space ships, satellites, meteors, astronauts and poker card symbols that come made out of alien metal.

The Space Wears logo is the wild icon of the game that enables players to form a winning combo by replacing other non special icons. The meteor icon is the scatter symbol that would trigger the scatter payouts for players, as long as players get from 2 to 5 icons. Lastly, there is the satellite symbol, which is the bonus icon. Three of these bonuses would trigger the bonus round.