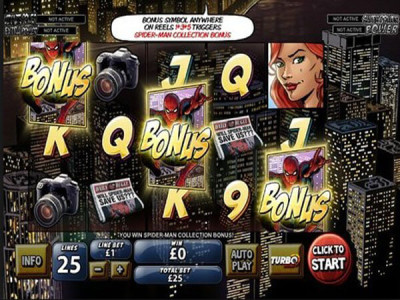 Here comes the web-slinging hero of the NYC in Spiderman Slots Online. He’s kicked the butts of many villains, joined the ranks of many heroes and still manages to make money taking pictures of himself. Here comes… Spider-Man! After making his run on the comics, on the movie & TV screens and almost everything that the media has to offer, Spider-Man takes a swing of faith and finally web-slings into the world of slot games. Get ready as the developers make their integration of Spider-Man and how he makes business with slot games. Get ready! Here comes Spider-Man!

The Spider-Man Slot Machine is a 5 reel, 25 payline slot game with the usual bonus stuff like bonus symbols and scatter symbols with the max jackpot of $25,000. It ain’t exactly a life-changing amount but c’mon, getting that jackpot will surely make anyone happy. Spidey’s struggling to get money so at least you can feel the struggle of money with him.

The game is designed like a comic book. If you’ve played the Captain America slot game, then you’ll know how it is: the game is designed after a comic book and it features the symbols and images of the Spider-Man world. The theme is based on the second movie of the original Spider-Man trilogy that starred Tobey Maguire and Kirsten Dunst so you’ll see the key images such as the NYC railway train, Doc Ock (who looks little uglier than the movie version) and other images that will remind you of the second movie. It’s also got the constant elements shown in the world of Spider-Man whether it’s the comics or the movies like the spider itself.

The game, like all other slot games, lets you choose your bets on the paylines available. Whether it’s a bet minimum or a bet max, you can bet your bets won’t go to waste. There’s a risk it all or save it all choice for you so choose whichever makes you happy but always remember you’ll get higher reward if you take a higher risk. Spidey takes risks all the time so why not you take a risk as well?

The wild symbol in this game is the Spider-Man Symbol. Like all other wilds, it will substitute for another symbol to make the winning combo. A nice feature about this is if you get 5 of these icons on the reels, you’ll get an instant win of 5000 coins which equates to a win of $25000! That’s pure luck for you. (If only you had a web snatch or something than you can get those symbols to align).

This game also features an auto play feature which lets you randomly spin the game up to 999 times. If you have to do some work without touching the mouse or you feel so lazy and you want to take a nap while letting the Spidey game go on, you can use this feature to let the game spin for you. You can also set it to skip certain features and speed up so that way, you’ll have won something on auto-pilot while taking your nap.

If you want to feel like a superhero, you can unlock the bonus round that involves Doc Ock if you get three or more Spider-Man scatter symbols. In this bonus round, you’re given a choice: accept or reject. Whatever you choose will result in saving the passengers in the train but it may mean smaller wins. This bonus lets you win multipliers, free spins and other cool freebies that will help you out as you keep on playing.

Confused about what to do in the game? Go ahead and web sling out of confusion with the rules and help page. It includes all the tidbits and info you need like what the value of the symbols are, how to activate the bonus round, what happens when you get these symbols and all that. You can also read the official rules which will help you out when you don’t want to get stuck in the gutter as you move along. All heroes need a refreshment course on everything and in this game, there’s nothing wrong with taking a refresher.

Overall, The Spider-Man Slot Game is a fun game. From the comic book art style to the cool gameplay and bonus feature, you’ll have a blast going along with Spidey as he beats the Doc Ock and foil his plans to take over NYC. Save the people of NYC and become a hero just like Spider-Man… in a slot game.