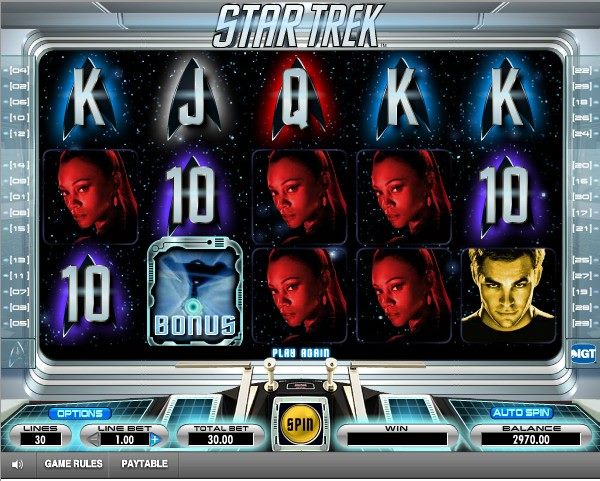 Star Trek is one of the latest video slot games offered by IGT. It is themed around the hit movie Star Trek. The beauty of this game is that it offers players various features and lucrative bonus rounds that allow them to have an entertaining and a rewarding experience. The game features many scenes from the 2009 hit movie.

Star Trek is a video slot machine from the amazing gaming selection of IGT that is provided to internet casino through IGT’s subsidiary, WagerWorks. The game is obviously dedicated to the fans and the followers of the hit TV series and movie, Star Trek. The game invites players to join the crew of the Enterprise as they sail through the unknown and the vast universe. IGT is known for its amazing visuals and sound effects that distinguish its games, and this game definitely falls under such category with its wonderfully crafted symbols and audio effects. The game is also equipped with plenty of bonus rounds that enable players to enjoy a fun-filled and a rewarding experience.

Star Trek fans can try the game here for fun without wagering any real cash or they can head to any online casino that gets its games from IGT such as Mr. Green Casino.

The game is themed around the crew of the starship Enterprise from the movie Star Trek. This is why the symbols appearing on the game’s reels and lines are all inspired by the movies. These symbols include the main characters of the movie such as Captain Kirk, Spock, Uhara and Scotty. It also includes other symbols such as the bonus symbol, a starship, Star Trek Logo and carefully crafted card symbol that fits the theme of the game.

The game’s wagering range starts 30 with and ends with 3000. The players will determine their wager by choosing the number of bets they want to place on each line. The bets available vary between one and one-hundred. The players will not choose lines or a coin value because they are fixed.

The players will be able to view the different lines and the special features of the game by viewing the paytable of the game. This paytable can be viewed at the bottom as they will find the word Payable under the control panel of the game at the grey area at the bottom. The Star Trek logo is the wild symbol that has the ability to substitute for any other symbol except the bonus symbols.

The game has 4 different bonus round that are named after each character. In order for these bonus rounds to be activated, players will have to get 2x bonus symbols + the bonus symbol of the character itself.