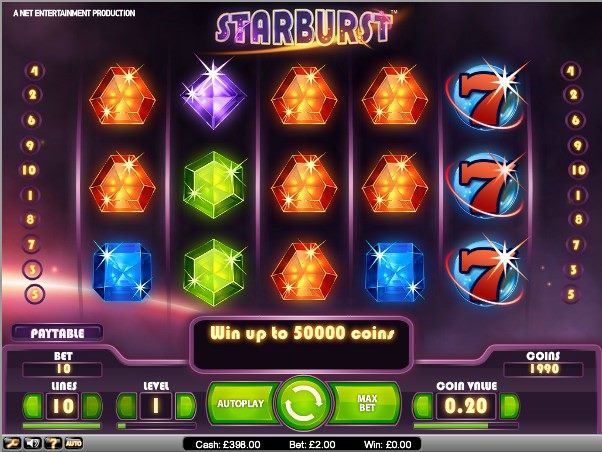 Starburst is a five reeled non progressive video slot. This game is developed by Net Entertainment so it can be found at major casinos such as Mr. Green Casino. This game has ten paylines for players to place bets on. The game has a set of impressive features such as the wild symbol which is the Starburst logo which appears on the 2nd, 3rd and 4th reels only and they expand to occupy the entire reel.

Starburst is a fantastic video slot machine that is developed and brought to players by Net Entertainment. The game offers players a very luxurious and a quirky video slot gambling experience that is unparalleled at any other software developer. The game is themed around space and jewels, this is why the game is called Starburst and it is the reason behind the fact that the reels and the symbols are found in space. The game provides players with a very rich visual experience accompanied by a list of rewarding symbols and bonus features. All of this helps players in enjoying one heck of a gambling experience while racking up on great rewards. This is not really a surprise as Net Ent has always been known for its high quality games and rewarding features. Players can try out this entertaining game at any online casino that has the power of Net Ent behind it such as Mr. Green. Players can also try the game for fun on this website.

Starburst has a very luxurious and a fancy theme as players will see a lot of diamonds spinning on the game’s reels that are found in space, accompany that by amazing digital sounds and rewarding features and you got yourself a fantastic and a rewarding game. Players can win up to 50,000 coins through the game. The game also has a very special feature, the lines of the game pay both ways, left to right and right to left.

The game’s setup is presented in 5 reels and 10 lines. On these lines & reels, players will see diamonds that have different color such as red, blue, yellow and purple. Other symbols include a red seven, Bar symbol and the Starburst wild symbol. Players will find plenty of options under the reels including spinning the game, the betting options and the auto play feature. This auto play feature enables players to place a bet and specify a number of spins and the game will start spinning automatically.

The betting range is determined according to the wagering options. For this game, the wager range is between 0.01 and 100. There are three options to go through, the number of lines (1 to 10), a betting level (1 to 10) and a coin value (0.01 to 1). These options can be found under the game’s reels.

The game’s special feature is the Starburst wild. This wild symbol can appear on the 2nd, 3rd and 4th reels. When that happens, the wild symbol will expand to cover the entire reel and it will substitute any other symbol in order to help players achieve a win. Not only that as it will also cause the re spin of the game and if another wild expands, it can re-spin the game for a third time.