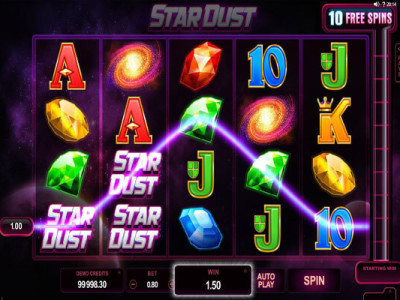 Stardust is one of the many new pokie machines that were released in December by the online gaming giant, Microgaming. The game takes player on an intergalactic gaming experience that is set in outer space. As apparent to players from the moment they open the game, they will see that the 5 reels of the game are located in outer space, where players will get lost in the vast universe and its stars.

The game is presented in state of the art visuals that are accompanied by calming sound effects, with the exception of the noise that happens when players earn a payout. Nonetheless, players will welcome that noise with open heart, especially when the payout is huge.

Stardust is among the list of new pokie machines that were released in December. It seems that Microgaming has been quite busy, as this game is only one of many. This is how Microgaming manages to keep its gaming selection fresh so players never get bored. The game takes players on a calming, yet a highly rewarding gaming experience that takes them to outer space where they will see precious gems and stones spinning in the backdrop of space in order to earn great prizes and trigger many bonuses.
The game has already gone live at many Microgaming powered online casinos, and here, we offer the game with demo credits so players can get to enjoy this interplanetary adventure for free. This way, they can give it a test drive before they start placing real money bets on the game at any online casinos that we have listed below.

The game has a format of 5 spinning reels and a total of 40 fixed lines, across which players are invited to place bets on, and then they can start spinning the reels of the game. They will enjoy an amazing gaming experience that takes them to outer space as they spin precious stones and jewels in the backdrop of the vast universe.

Like most Microgaming powered pokie games, the game has a control panel that is located right under the spinning reels of the game. Through this control panel, players will be able to control every aspect of the game.
The Wagering Range

The game’s wagering range is dependent on the two betting variables that the pokie has. These variables are the number of coins as well as the value of the used coins. Toggling through these two variables will result in the betting range of the game which varies between 0.40 and 100 credits for each spin of the reels.

The game has two special icons. The first one is the Stardust logo, which is the wild icon of the pokie that would replace other icons to help players get pad. During free spins, it can appear stacked on reels 4 and 5. Speaking of the free spins round, it is triggered when players collect 10 gems, and they can collect these gems when the Galaxy symbol lands on the 3rd reel, then it collects 1 gem per reel. Players can earn up to 13 free spins.