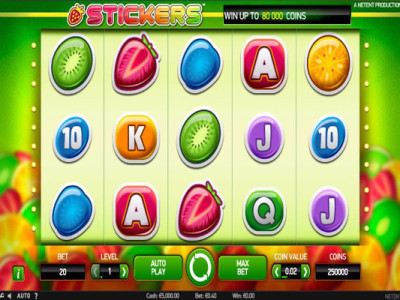 It seems that Net Ent is fascinated with picking one word titles for their games like Dracula, Sparks and now, Stickers. Although the game is entitled Stickers, it is not entirely themed around stickers, as from the first glance, players will notice that this is a fruit machine at heart because of all of the fruit symbols that will be seen spinning on the reels of the game, as for the stickers part, it is because all of these fruit symbols come in the form of stickers. Although the game has a somewhat basic and a classic theme, which is fruits, the game is pretty fun, exciting and rewarding at the same time.

Net Ent games are always known for their intense game play and their action packed themes, while this come does not fall in this category, but it is still quite capable of entertaining players and providing them with a highly exciting gaming experience that comes with many winning chances and features that would make their stay at the game worthwhile.
Being a Net Ent game automatically means that the game has amazing visuals that would captivate the players from the moment they open the game, and during the game play.

The game’s theme is mainly about fruits, despite the title of the game stickers, although, the fruit symbols does come in the form of stickers, but for any veteran pokie player, this is certainly a fruit machine. The symbols that would land on the reels include an orange, a strawberry, kiwi, lemons and poker card symbols.

As for the setup of the game, the pokie has a 5 reeled format that hosts a total of 20 bet lines that players will place their desired wagers on at the control panel of the game. Speaking of the control panel, it comes in advanced visuals, like most new Net Ent games out there.

The pokie’s wagering range varies between 0.20 and 200 credits for each single spin. Players will toggle between these bets by choosing how many coins they wish to place, as they can place from 1 coin up to 10 coins with values that vary between 0.01 credits up to 1 credit per coin.

The game has one special icon which is the wild icon of the game that is represented by the wild red spade icon. This wild icon is going to substitute for any of the other icons on the game’s reels so players can have a better chance at claiming a payout.

Other than begin a wild, this icon can trigger the wild sticky spin when it lands on any of the reels, it will stick to its place and cause a sticky spin to give players another chance of winning with a guaranteed wild.