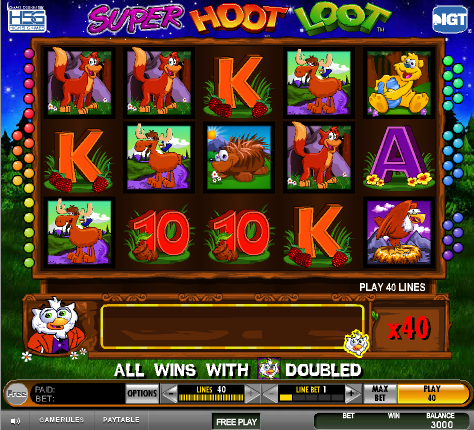 This entertaining video slot offers hours of great times. Super Hoot Loot is an older style graphics slot, that lets players play the game for free or play for real wagers. The name of the game is derived from the main character being an owl and other characters being woodland creatures.

Super Hoot Loot is a very cartoonish themed video slot machine that is developed by none other than International Game Technology. This vouches for the quality of the graphics, the quality of the sounds and the features. This is why players can expect to have one heck of a gambling experience through this video slot. The game is also packed with a variety of bonus features and special symbols that can be quite rewarding for lucky players who trigger them.

Since the game has a cartoon theme, players will see numerous cartoon characters on the reels of the game. This theme is not only apparent from the symbols but from the design of the interface of the game itself along with the control panel and the reels’ background. Players can try this fun game here for free or they can head to an online casino like Mr. Green in order to place real stakes at the video slot.

Players will quickly catch on to the theme of the game as soon as they open it and see the cartoon characters on the reels as well as the design of the layout. Players will also see that the game has 5 reels and a total of 40 lines. On these reels and lines that the game offers, players will see a cartoon moose, fox, tiger, bear, vulture, squirrel, a golden safe door and card symbols that are designed in a cartoonish way.

Under the reels, players will see a bar, this bar is dedicated to the bonus round symbols that players can collect during a spin in order to trigger a bonus round and earn great rewards. Under it, players will find the game’s control panel, it is where players will be able to place wagers and specify the number of lines they want to wager on.

Players will find all of the available wagering options that they can change in order to determine their final wager on each spin of the video slot just under the reels. They will choose a number of lines from 1 to 40 and a line per bet that varies between 1 and 5. This result in the creation of the game’s betting range that starts with 1 and ends with 200 per spin.

The Hoot Loot logo symbol will replace any other symbols except the other bonus and scatter symbols that the game has to offer. The golden door symbol is the scatter symbol that can trigger the free game feature when three of these golden doors appear on the reels of the game. As for the chicken symbol, it can substitute all symbols except bonus symbols and it will also double the winnings that it participates in creating. Players can find more about the details of the special bonuses and symbols at the game’s paytable at the bottom. 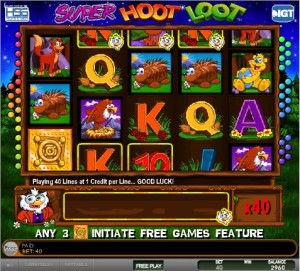 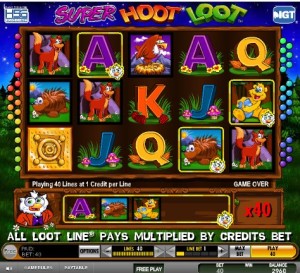 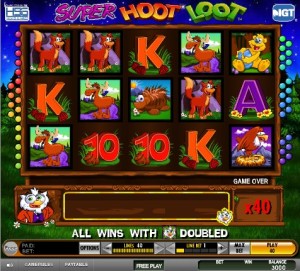