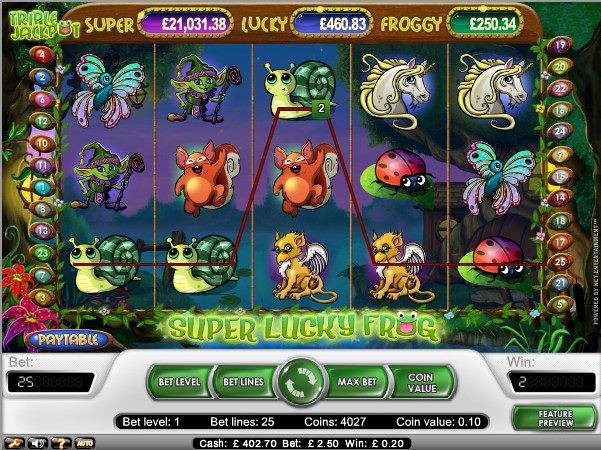 Super Lucky Frog is a  video slot that is developed by Net Ent. It is presented to players in an anime style graphics with characters with wide and cute eyes. The three major characters are the frog, imp and the fairy. These characters will become animated if they are a part of a winning combo. The game offers wilds, scatters and other rewarding features.

Super Lucky Frog is a very rewarding video slot that is provided to you and the entire online gambling world by none other than Net Entertainment. This is why you will be able to enjoy top-notch graphics and outstanding sound effects that will drive you right into the theme of the game. Speaking about the theme of the game, the game is based around a lucky frog and nature. This is why players will notice that the green color dominates the reels of the game and its symbols. The interface and the design of the game itself are also based around the lucky frog and nature, as players will notice that as soon as they open the game and start spinning the reels.

The game is a Net Ent powered game, so players will have the chance to try the game for fun here or they can head to any Net Ent casino in order to place real money wagers on the video slot. The list of casinos that are provided with games by Net Ent includes the well accredited casino, Mr. Green Casino.

The game has 5 reels and 25 lines for online players to place bets on. All of these reels and lines have symbols that are inspired by the natural theme of the game. This includes a frog, a snail, a unicorn, a squirrel, mushroom, a lady bug, a goblin, a firefly and a fairy. The reels themselves are located in a natural set up with flowers, branches and leaves surround the game’s reels. The game is also pretty colorful to fit the theme as players will see that the lines of the game are outlined by colorful numbers that players can click on in order to view the line and its location on the reels. Under all of that, players will be able to find the wagering options and the control panel of the game. Through this area, players will place their wagers, place max bet, spin the game’s reels and more.

The game’s wagering area and options are found under the reels. Players will find the different options that they can change in order to set their final wager on the game before they start spinning. The first one is the number of lines that they decided to activate by placing stakes on. Players will choose from one up to 25 lines. They will also choose a bet per line and a coin value. The minimum wager that they can place is 0.01 while the maximum one is equal 50.