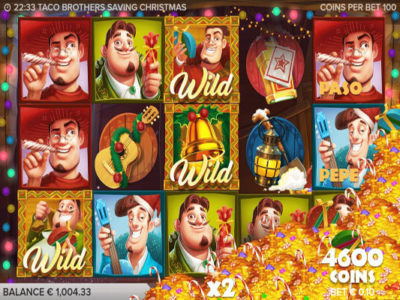 Taco Brothers Saving Christmas is the newest pokie title to be released by Elk Studios. This brand new game takes players on a Mexican ride as they join the three Taco Brothers once again. The game is the Christmas version of one of the most popular games by the developer, Taco Brothers. This time, the game takes players on a Christmas ride as the three brave brothers stand against evil Captain Diaz to save Christmas. Taco Brothers Saving Christmas has a 5 reel setup that is home to 243 ways to win. The game is available for players right here for free. This way, they can check out what it has to offer, prior to playing it for real cash. So get ready for a Christmas experience that is action packed and full of rewards.

Taco Brothers Saving Christmas is a 5 reel game that is the Christmas version to another popular Elk Studio game. The old game is called Taco Brothers. Therefore, players can expect a high quality experience that has a Christmas theme. The pokie invites players to join the Taco Brothers as they fight against Diaz. They will not only help retrieve the golden coins and fortunes of the town, as they will try to save Christmas itself. This explains the title of the game.

As can be expected from an Elk Studios game, the pokie comes in great visuals and sounds, as well as animations. All of this helps create an immersive and a well presented ride. It is also packed with great winning chances. These wins can be claimed through the 243 ways to win of the pokie, as well as with the help of the game’s bonuses and special icons.

The theme of the game is quite obvious from the title, as the game invites the online players to enjoy a Mexican themed experience. They will get to join the Taco Brothers as they try to save Christmas from the hands of evil Cpt. Diaz. Players will enjoy this experience through the 5 reels and the 243 ways to win that the game hosts. These lines have many winning chances plus the special features and icons that the game has.

The game has two different wild icons. The first wild icon is the golden wild bell. This golden wild bell is going to replace other icons, with the exception of the scatter bonus and the wild Taco Brothers logo. The Taco Brothers wild logo will replace icons. That is not all as when 2 of them land on the reels, this will give players a re-spin for another chance to get 3x free spin safe icons on the reels.

Speaking of the safe bonus icons, 3 of them would trigger the free spins round. It is called the Wild Escape Free spins. The Taco Brothers will be running wilds, while Captain Diaz will try to imprison them.