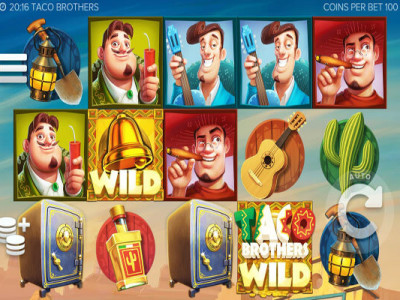 Travelling to the past, to 1881 to be exact, to Santa Maria in Mexico can be quite fun, as apparent from this new Elk Studios powered game, Taco Brothers. This game is the 4th game to be released by the gaming developer, and like the previous games, the game is quite promising, and shows that Elk Studios have all what to takes to be at the top of the online gaming world. Of course, it will need a much larger gaming portfolio to do that, but it is on its way.

The game has a Mexican theme, as mentioned above and it is action packed and filled with high paying ways to win, as well as special features that are quite rewarding. So try your luck, and join the Taco Brothers on one heck of a gaming experience that can be tried here for free with no deposits and a lot of spins.

Elk Studios might be a new gaming developer, but it certainly knows what players want. After Champion’s Goal, the gaming developer decided to approach a whole new theme. So instead of a soccer match, the game takes players to Mexico in 1881. So get ready for a truly amazing Mexican themed gaming adventure that is full of rewards, pays and special icons.
The game allows players to live this theme to the max, with its great visuals and vivid sounds effects that will make players feel as if they are really in Mexico.

The game’s theme is all about Mexico, so get ready to take a trip to the Mexican lands in 1881, more specifically, to the town of Santa Maria. Everybody in this beautiful village is living a happy and a calm life, but it all changes when the evil Captain Diaz sets his foot into the village. He then takes all of the villagers’ pesos and tacos. This pushes the villagers to seek the help of the three Taco Brothers who are the only hope for these poor villagers to get back what was theirs.

The three brothers, Pico, Peco and Paso will need your help in order to blow up the safe of Captain Diaz so they can empty what is in the vault through the tunnels, back to the people of Santa Maria. The game offers players such an amazing experience through its 5 reels and its 243 ways to win.

Players will place their wagers as they click on the Bet cell which will open a set of fixed wagers that they will choose from .These fixed bets vary from 0.20 to 50 credits per spin.

The golden wild bell is the substitute icon of the game that would replace other icons on the reels of the game. It will not be able to stand in for other special icons. Another special icon is the safe icon. Three of this icon would trigger the Free Spins bonus round. There is also the Taco Brothers Re spin icon that can substitute for other icons while triggering a re spin on the reels.