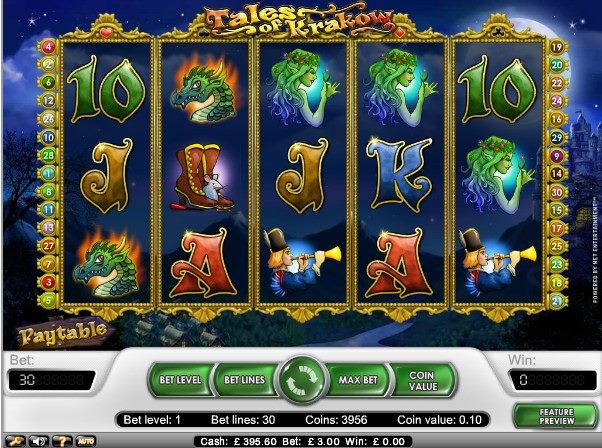 Tales of Krakow is a five reeled video slot machine that utilizes the latest Net Entertainment technology. It has five spinning wheels filled with mystical creatures. There are many bonus rounds on offer that players can take advantage of such as the Free Spins round and the Dragon Egg Bonus Round among others. The background of the game uses the beautiful landscape of mountainous Krakow.

Tales of Krakow is a fantastic game that will take players on a very wild adventure in an exotic world that the video slot creates through its aspects and features. This includes the symbols appearing on the reels, the interface and design of the game itself as well as the exotic sounding audio effects and music in the background. Of course, being a Net Ent powered video slot, players will expect to enjoy state of the art visuals of the highest quality, vivid and real sound effects and a lot of rewarding features. All of this makes for a very entertaining game play that is rewarding at the same time. Players can enjoy this exotic and exciting video slot right here for fun as Best Casinos offers them the chance to spin the game without having to place real money credits. On the other hand, players who are looking forward to place real money stakes on the game will have to head to any of the online casinos that are powered with games by Net Entertainment such as Mr. Green casino.

The game has a very exotic theme as it will take players into the world of the tales of Krakow that is filled with mythical and mysterious creates. The graphics and visuals are all themed around Krakow which will help players get invested into the theme of the game so they can enjoy the game while being rewarded. The game has a setup of 5 reels and 30 lines. The symbols that appear on them include poker symbols that are designed in a way to fit the setup and theme of the video slot. The symbols also include a dragon, a green witch, a knight, boots, a soldier blowing an instrument and the devil on the face of the moon.

The game will reel players into the world that it creates through the design as well, as players will see that the reels themselves are located in the mystical lands of Krakow. The sound effects will also take players there with an exotic and a mysterious themed soundtrack and music that players will hear when they achieve a win.

The game’s betting range varies between 0.01 and 60 credits for each spin. The factors that affect this wagering range is the number of lines as there are 30 winning lines to be activated, the coin size (from 0.01 and 0.50) and one of the 5 betting levels that the game offers.

The game is filled with special symbol and features. The wild symbol is the devil face on the moon which gives great rewards plus replacing any other symbol in order to help players in creating a winning symbols combination except the scatter symbol. The scatter symbol is the knight and it can give players free spins on the video slot. As for the dragon, it is the bonus symbol, 3 of the dragon symbols will trigger the bonus round of the game.