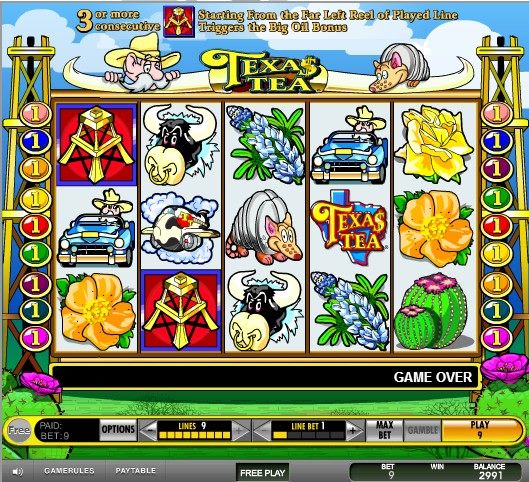 Texas Tea is an IGT video slot machine. It has five reels and nine paylines. This allows players to utilize five spinning reels in order to form winning combos. The slot machine has a gusher of bonus rounds such as the Bonus game Action where players are dragged to the rich oil fields of Texas in order to strike black oil and become rich.

Texas Tea is a very bright and an exciting video slot machine from the varied portfolio of IGT. The game is themed around the south, Texas to be exact. This is clear from the name of the game, Texas Tea. This is why the symbols appearing on the reels of the game are all themed around the southern state of Texas. Players will also enjoy a Texas themed soundtrack that they will listen to during the game play. This game is also very rewarding as apart from the normal line payouts, players will be able to earn great rewards through the bonus rounds and special features that the game has to offer them. Players can try the game with free credits at this page or for real money at Mr. Green Casino.

Since it is an IGT game, players can expect wonderfully crafted symbols and outstanding sound effects accompanied by a long list of rewarding features.

The game has 5 reels and 9 lines that players can place their bets on. The game is themed around Texas, this is why players will notice that the reels are located in the green fields of Texas. Players will also see that the symbols appearing on the reels of the game are themed around Texas. These symbols include an Armadillo, a Texas businessmen, a private plane, an oil refinery, corn, a white flower, the Texas businesses man driving his car and a cow among other symbols. Right under these Texas themed reels and lines, online players will find the game’s control panel. This panel contains the buttons that players will click on in order to place their wagers, spin the reels, view the paytable and control other settings.

The game’s wagering range lies between 1 and 45. The wagers that players will place is determined through the bet per line and the number of lines that players choose to place wagers on. The game has nine paylines and five different bets per line available. After players place their wagers, they will click on the Play button at the far right. They will find a number under the play button which is the wager that players have placed. This way, players will know their wager before they spin the reels.

The Texas businessman is the scatter bonus symbol, this symbol rewards players with instant scattered payouts. Another bonus symbol is the oil refinery symbol which can trigger the Big Oil Bonus Feature. The game also has a gamble feature, players who earn a payout will get a chance to double their winnings by entering the gamble game. In this game, players will have to predict the color of the upcoming card. If it is right, they will double the winnings, if not, they will lose it all. Players can gamble their winnings multiple times. 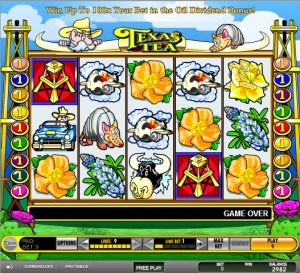 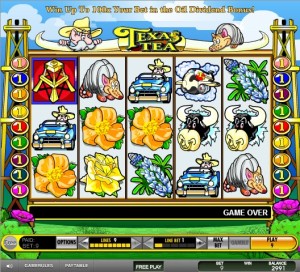