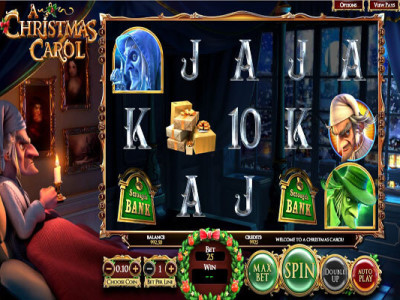 The Christmas Carol is the latest 3D addition to the amazing portfolio of Betsoft gaming, and it was released just in time for the best time of the year, Christmas. The game is themed around one of the most popular and well known Christmas children stories, A Christmas Carol: Ghosts of Christmas Past. So get ready to join the Scrooge as he meets the ghosts of Christmas in a truly one of a kind 3D gaming experience that you will never get enough of.

The game is presented in 3D visuals, which will surely captivate players from the moment they open the game, as well as the animations and the Christmas themed sounds.

Christmas Carol is a Betsoft Gaming powered 3D slot machine, that is a wonderful and a well timed release, just in time for Christmas. The game has amazing visuals, sounds and it comes packed with great line pays and bonus features, which is what players can expect from a game from Betsoft Gaming. The game has 5 reels with 25 lines that boast the 3D symbols of the game through which will earn many rewards.
The game can be checked out for free right here on this page, where we host the game with demo credits. This way, players can see what the game has to offer before they start placing real money wagers on its lines to earn back real rewards.

The game has 5 reels and 25 lines across which players will see 3D symbols like the Scrooge, stacks of money, golden coins, a wild turkey, and the different ghost of Christmas.

The game’s wagering range falls between 0.5 and 125 credits per spin.
Bonus Features

The game comes with a Wild thanksgiving turkey that would replace all other icons on the game’s reels to help players trigger a payout. It will not replace the ghost of Christmas. Speaking of which, there are three ghosts of Christmas that will appear, Ghosts of Christmas Past, Christmas Present and Christmas Future. Getting 3 of the same ghost would trigger a special feature. These features include free spins, multipliers prizes and extra wilds.