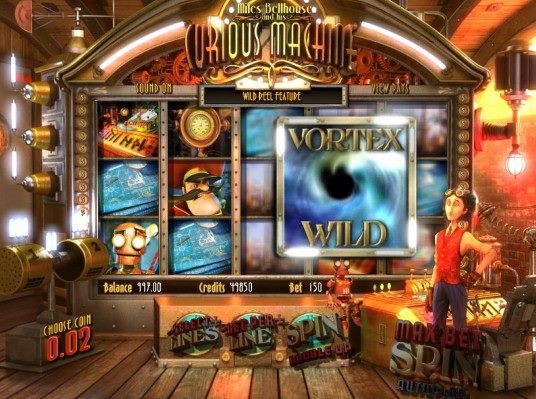 The Curious Machine is another amazing 3D slot machine by Betsoft Gaming. It has 5 reels and 30 paylines. It has many rewarding features and winning choices in order to satisfy all players who choose to play the game. It is themed around the concept of time travelling. It features an inventor who is accompanied by his loyal robot called Gizmo as they both welcome visitors instead of time traveling.

The Curious Machine is a 3D video slot machine from the well known 3D portfolio of Betsoft Gaming. This ensures players that the graphics are of high quality and that they will enjoy outstanding sound effects that will reel them into the theme of the game in no time. It also means that the game can be found at Mr. Green Casino as well as other online casinos that have the power of Betsoft behind them. The Curious Machine is themed around the concept time travel but it comes with a twist. Most time travel themed games or movies take the main characters of the game or the movie to other ages and time periods, which is not the case in this game. In this game, the two main characters of the game will operate the curious machine that will give them a window and a portal to view other time periods.

As mentioned above, the game is themed around time travel and it has two main characters. These two characters are the crazy scientist and his loyal red robot who accompany him. At the right side, players will see the curious machine control panel that the scientist will operate in order to initiate the machine. As for the control panel that the players will use, it is at the bottom. It includes the wagering options, max bet button and the spin button that players will use to set wagers and initiate the game.

The game is presented in 5 astonishing reels that are filled with 3D symbols and 30 rewarding paylines for players to place their desired bets on. The symbols that are spread on the reels and paylines of the game are 3D and they can even turn into animated ones when they contribute in the formation of a winning combination on an activated payline. These symbols include a sea captain, blueprints, the red robot, the scientist, a compass, a futuristic city, the curious machine, dinosaurs, vortex and more.

The game’s wagering range resembles the wagering range of most 3D Betsoft Gaming powered video slots, the range begins with 0.02 credits per spin and ends with 150 per spin. The betting range is determined by three things, the bet per line that the players will choose, the coin value used and the paylines that they choose to activate and place wagers on. All of this can be determined under the reels  at the wagering area.

One of the unique bonus symbols of this game is the vortex symbol. It is the wild symbol that can replace other symbols to create a win. If no wins are created, the symbol will create a massive vortex that is going to affect all of the symbols around it and changing their place in order to form new combinations of symbols to give players another chance of achieving a win.