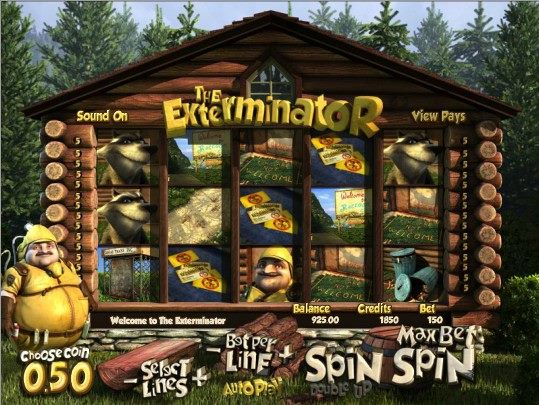 The Exterminator is designed and developed by Betsoft Gaming. It is clear from the name of the slot machine that it is themed around Exterminators. This is why there will be an Exterminator by your side on the game screen as you play the game. It is a five reeled 3D slot machine with thirty paylines.

This is yet another fantastic 3D Video slot by Betsoft Gaming. Betsoft Gaming has built quite a reputation for itself for having one of the best 3D video slot portfolios on the internet. The games that are on offer at the Betsoft Gaming powered casinos such as Mr. Green are unmatched and unparalleled at any other internet casinos on the market. This game, The Exterminator, allows players to tag along with an Exterminator who eradicates animal and insect infestations. He is well equipped and he knows how to deal with these infestations. The exterminator will accompany players every step of the way during their gambling experience, as they will find him standing in his yellow jump suit and his equipment and tools at the left side of the screen.

The game is presented to players in fantastic visuals and a fitting background soundtrack, which allows players to enjoy the game to the max.

The game features five spinning reels & boasts 30 lines that players will have a choice to place their wagers on. The game is themed around Exterminators, this is why the symbols of the reels and the design are inspired by that theme. The players will also see the exterminator in his yellow clothes standing at the left side of the reels as he chases stray animals every once a while and he will also celebrate and interact with the combinations of symbols that players succeed in achieving.
As for the symbols that appear on the reels, they include a trashcan, the exterminator, the blue prints of a house, stray animals, tickets, footprints and other symbols.
The reels itself is located in the great outdoors and players will see trees, grass and wooden planks in the background as well as around the reels which adds to the reality factor of the game.

The game’s wagering range is determined according to the number of lines that each player plans to place wagers on, the number of coins they want to place on each activated line and the value of each coin. The players can go through all of these options at the bottom of the reels through the wagering panel of the game. The wagers range starts with 0.01 and ends at 150 credits per spin.

The game is filled with a lot of bonus features and rewarding rounds that allows players to enjoy an exciting experience that is rewarding at the same time. The players will be able to know all about these features by opening the paytable of the game by clicking on the view pays button. One of these special features is the free spins bonus round. This feature can be activated whenever players get at least three footprint symbols on the game’s reels. This bonus round is called the Great Raccoon Chase mode.