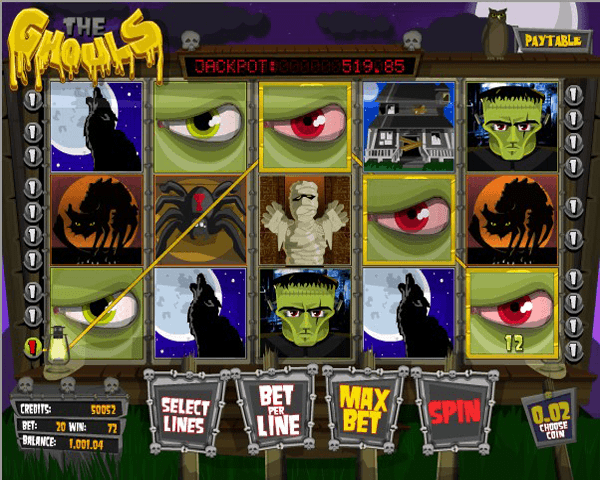 The Ghouls is a five-reeled video slot machine that has twenty paylines. This game has a progressive jackpot that turns normal players into instant winners. This game is Halloween themed. This is why the game’s symbols include a Haunted house, Frankenstein, a scary wolf and a mummy along other scary symbols. The wild symbol is the Haunted house icon that also allows players to hit the jackpot. As for the scatter symbol, it is the Dracula icon.

The Ghouls is a fantastic video slot machine that is developed by one of the top names in the software development industry, Betsoft Gaming. As a result, players can expect to find top notch graphics of high quality that Betsoft Gaming is known for. Players will also be able to enjoy the great audio effects and features that the game has to offer them. Adding to that the rewarding bonus rounds and special features, the game becomes one of the most lucrative and entertaining video slots on the internet. Players who want to grab a taste of that game can do so right here for fun or they can place real money wagers at any Betsoft Gaming online casino such as Mr. Green.

The game is themed around Ghouls and the game creates this theme through the graphics and visuals that the game offers as well as the great sound effects that are related to the theme of the game. This is how the game creates its theme and the scary world of the ghouls and invites players into it so they can enjoy a thrilling and a rewarding gambling experience.

The game’s setup comes in 5 spinning reels accompanied by 20 lines that players will place their stakes on. The entire game is themed around the scary and dark world of the ghouls. This includes the symbols that appear and spin on the reels, the layout of the reels, the designs of the game, the control panel and the sound effects. For example, the symbols that spin on the reels are all themed around that world, they include Frankenstein, a haunted house, a mummy, a ghoul, a zombie and a wolf among other symbols. The reels of the game itself is located in a graveyard and the wagering panel and control panel at the bottom come in the shape of wooden sticks with banners on them.

The players will place their stakes by choosing any of the wagering options that are found under the reels. Players will find options that include the bet per line, the number of lines and the coin value that will be used. The coin value range between 0.02 and 0.5 and there are 20 lines to choose from. Putting all that together with the bet per line will create the games wagering range.

The game’s paytable can be found at the top right and it will show players the details of the special features, the line payouts as well as the formation of the 20 lines. The game’s scatter icon is Dracula, this symbol rewards players generously as well as activating the free spins round if a minimum of 3 appear on the reels. As for the game’s wild icon, it is none other than the haunted house.