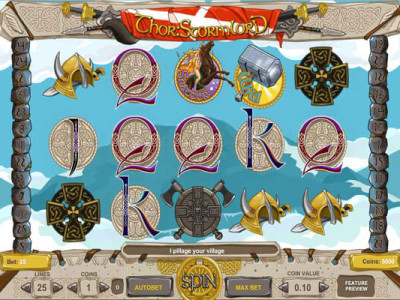 Thor: Stormlord is an awesome game that is powered by 1×2 Gaming. As apparent from the title that 1×2 Gaming has chosen for the game, it is all about the Nordic Gods, and specifically, around Thor, the lord of thunder with this hammer, Mjolnir. The game’s visuals, sounds and bonus features and interface are all affected by the Nordic theme of the game. This is why players who spin the reels of the game are in for a great adventure. So get ready to travel to the north and join the brave and ruthless Viking warriors in an amazing gaming experience that is full of rewards and fortunes.

Thor Stormlord is an amazing pokie that is brought to players from the portfolio of 1×2 Gaming. The game takes players on crazy adventure that takes place up north in the Viking world. The Vikings were ruthless and brave warriors that raided other cities and claimed their fortunes as their own. Join the Vikings and rub shoulders with the Nordic gods like Thor and Freya.

The game also comes packed with a great set of line pays and bonus features that players will take advantage of during the game play. If all of this intrigues you and encourages you to try the game, then you are in the best place to do so, as we have the game here so you can try it out with demo credits, without having to place any real money wagers or real bets.

The theme of the game is about the Viking Warriors and the gods that they have worshiped like Thor and Freya among others. The Vikings were ruthless and they were known of raiding cities and even countries in order to loot them and claim the fortunes as their own. You are invited to tag along with these Vikign warriors and their gods as they raid these cities and get to claim your own share of these fortunes.

The game offers this great Vikign themed adventure through its 5 reels that have 25 lines spread across them. The symbols that are going to appear spinning on the reels to form the line pays are all inspired by Vikings and Nordic gods as they include Vikign warriors, Viking weapons, axes, shields, Thor, Freya, Mjolnir, Viking Treasures and much more.

The betting range of the game is dependent on the betting options that the game has. They are how many coins players want to place on each line, the number of active lines and lastly, the value of the used coins. The betting range is between 0.01 and 62.5 credits for each single spin of the game’s reels.

The first special icon that the game has is its wild which comes in the form of the Freya the Nordic Goddess. She will use her god given powers in order to stand in for other regular symbols to help trigger a payout. Mjolnir is a scatter symbol that gives multiplied pays, and will strike symbols on its right turning them wild. The other two symbols are Thor himself, who represents the bonus symbol that can trigger the bonus round, and the other is the scatter goddess on her horse that triggers the free spins.