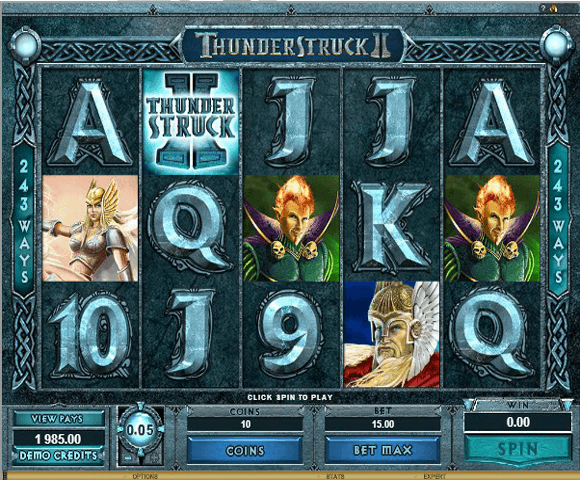 Thunderstruck 2 is a Microgaming slot machine. This game is the sequel of one of the most popular slot machines, Thunderstruck. The game follows the same theme of the first game with enhanced graphics, more real sound effects and plenty of features. The game is themed around Thor and the Northern mythology. The symbols include Thor, his hammer, Odin and Loki among other symbols. Players will be glad to know that they can win up to 2.4 million coins in the game’s jackpot.

Since the game is powered by one of the leading software developers in the industry, Microgaming, players can expect top notch quality graphics & sound effects and a myriad of bonuses and special features that the game will offer. The game can be enjoyed for fun on Best Casinos through this very same page while players can head to any of the Microgaming powered online casinos in order to place real money stakes at the game. The list of Microgaming powered casinos includes Gaming Club and Jackpot City, which are two of the most accredited Microgaming casinos in the industry.

As mentioned above, the video slot is themed around Thor and the mighty gods of the North. This is why online players will notice plenty of God symbols on the 5 reels of the game. There are no paylines here as the game has the 243 ways to win format which gives players more chances of winning. The symbols that appear on the reels includes Thor, Thor’s Hammer, a Viking ship, Odin, Loki, The Home of Thor, Valkyrie among card symbols that are crafted to be suitable for the theme of the game. Players will notice an amazing soundtrack and music that are triggered when players achieve a winning combination of symbols.

Under the reels, players will find the two wagering options that the game offers. They will also see their balance and the paytable at the bottom left, right next to the wagering options. The paytable can be viewed as players click on View Pays. It will enable them to see the different payouts and special bonuses that Thunderstruck 2 offers.

The game’s wagering range falls between 0.30 and 15. The options that players will toggle between are the size of the used coins as they vary between 0.01 and 0.05 and the number of coins as players can place up to 10 coins.

The logo of the game is the wild and the multiplier symbol. This symbol can substitute any other symbol to create a winning combo and if that happens, the winnings are doubled. The game has 4 scatter symbols that trigger free spins, the 4 symbols are the 4 different characters, Thor, Odin, Loki and Valkyrie. The number of free spins depends on each character, players can find out more at the Paytable of the game.