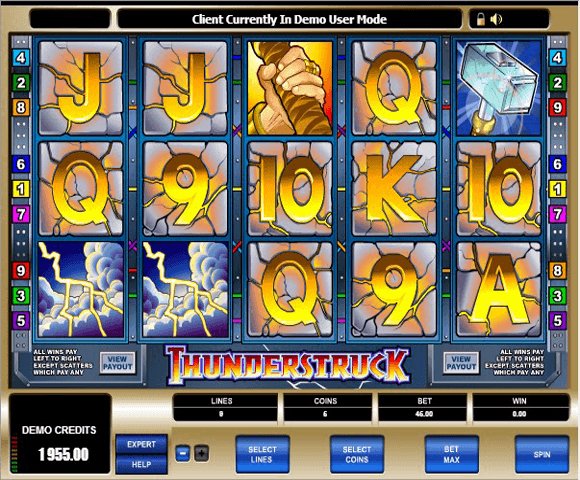 Thunderstruck is a slot game that is based around the mythical warrior and god from the Northern mythology, Thor. This is why the symbols include other Northern characters such as Odin, Loki and other symbols. The game has five reels and nine lines. The game also has a scatter symbol which is the Rams symbol. When three scatters appear on the reels, they will trigger the free spin round. The game also has a wild symbol and a gamble bonus game.

Thunderstruck was one of the first video slot to be themed around Thor and the gods of the Vikings. The Vikings are those brave warriors who used to live in the North and this game is about the gods they used to worship. These mighty gods were known for their ability to control thunder and lightning, this is why the game is named Thunderstruck. This game was so successful and was a huge hit that Microgaming felt the need to release another video slot as a sequel, it is called Thunderstruck 2. It has the same theme but it offers players a higher visual quality experience as well as more features. This does not mean that this game is not of high quality as its design and visuals are very captivating that they will take players right into the world of Thor and the other mighty Norse gods. The game is also as quite as lucrative with the myriad of bonus symbols and special features that the game offers, all of this enables the game to provide players with a very lucrative and a rewarding gambling experience. Players can enjoy this experience at Gaming Club or Jackpot City, as for players who want to play the game for fun, they can do it right here.

The game creates the world of Thor and takes players into the league of the gods through the symbols and the visual graphics of the game. These symbols appear on the 5 reels of the game and the 9 lines that players can place bets on. These symbols include Thor, the hammer of Thor, Thor’s homeland in the skies, thunder, a Horn among other symbols including poker card symbols that are designed with thunder to be fitting to the theme.
Under the reels, players will see a number of blue buttons. These buttons will form the game’s control panel as they are the buttons that players will click on in order to spin the reels, specify their wagers and place max bet among other things.

The game’s wagers are determined according to the number of lines (1 to 9) that players will choose to activate and place stakes on, the coin value used to place these wagers (0.01 to 1) and a number of coins on each line (1 to 5). This also creates the wagering range of the game that lies between 0.01 and 45.

The Holy Goat is the scatter symbol that can activate the free spins bonus round for players who get 3 of these symbols on the reels. Players can earn up to 15 free spins. As for Thor, he is the wild symbol. Apart from substituting for any symbol on the reels, it will also multiply the winnings by two if it participates in creating any winning combo.