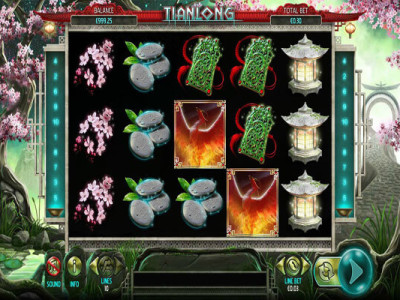 Tianlong is a 5 reeled pokie machine that is developed by the team at Next Gen Gaming. This means that players better be ready for a one of a kind experience that comes packing a punch with its theme, its features and winning chances. The game lives up to its name, as it offers players a truly remarkable Asian themed experience that is based around the Celestial Dragon, Tianlong. Players will get to join this celestial creature in a great gaming adventure that is full of winning chances and Asian fortunes.

Tianlong by Next Gen Gaming is a fun and a rewards filled pokie machine. This new game has got a lot of winning chances for players as they place their bets and spin the reels. They will be able to claim great rewards through the 10 wager lines that the game offers.

The game has an Asian experience that is all about dragons and their golden fortunes. The game also boasts multiple special icons and features for players to take advantage of. The video pokie is also presented in wonderful visuals that create the immersive theme of the game, plus great fitting sound effects. The best part is that the game can be played right here for fun, so players can check out the game and what it has to offer, prior to placing real money bets.

Tianlong has an Asian Dragon theme. This is why the visuals and the sounds of the game would take players on a wild ride into the Far Eastern lands. Players will join Tianlong the Celestial silver dragon and the Phoenix as they try to claim their share of the golden dragons’ fortunes. The game has a five reeled setup that is home to 10 wager lines. Players might think that 10 is a small number of paylines, but the game proves them wrong with its generous line pays, and multiple special features.
The visuals of the game in include Tianlong, the Celestial dragon, the Phoenix, cherry blossoms, a small Asian plant, paper lamps, rocks, an Asian necklace and more.

The betting range is between 0.10 and 250, thanks to the single betting option. This option is the bet per line which varies between 0.01 and 25.

The first of the special features of the pokie is the wild. This wild comes in the shape of Tianlong, the celestial silver dragon. The dragon is going to substitute for all other non special icons to help players get paid. It will replace the icon that is going to result in the highest paying combo possible. It can only land on the 3 middle reels, and they can expand to cover the entire reel.

The Phoenix can also land on the 3 middle reels only, and three of the phoenix icons would trigger the free games feature. This gives players 15 free games, with the ability to trigger more.