Titans of the Sun Hyperion 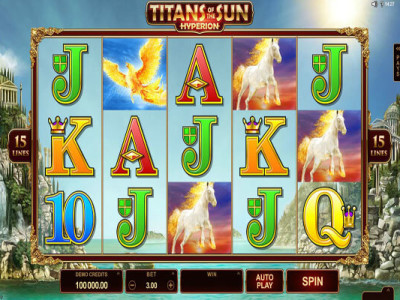 Titans of the Sun Hyperion is one of the newest pokies to be released by the internet gaming giant, Microgaming. The game is one of two sister pokies that have the same theme and almost the same name. The game has a theme that is inspired by Ancient Greek Mythology and this is why it is entitled “titans of the Sun”. The game follows the adventures of one of the heroes from this Mythology, Hyperion, the son of the sun (no pun intended). Players shall join the hero in his travels as he searches for his long lost love, and they will get to claim their own share of the fortunes and treasures that they will come across during these travels.

Microgaming is well known for releasing new pokie machines each month, and for October, the gaming giant has released two twin pokies, Titans of the Sun Hyperion & Theia. The game we have here is the first one, it follows Hyperion in his adventures. The game is offered in awesome visuals, which is not really a surprise since the game is coming from Microgaming.

The pokie also comes with a great set of line pays and special icons that players can claim as they enjoy the Greek themed adventure that the pokie has in store for them.

The game has an Ancient Greek theme that is focused on the great Mythos and legends of the Ancient Greek civilization. Players are going to join the Hero Hyperion as he ventures off across the lands of Greek in order to find his long lost love so they can dance romantically under the moon light, as well as look for golden fortunes and treasures that Ancient Greece is well known for.

The game offers this wonderful and action packed theme through its 5 spinning reels, 3 rows of icons and a total of 15 fixed payline. The game’s visuals are inspired by the theme as they include a fiery white horse, a phoenix, a couple dancing, Hyperion and poker card icons as well as the golden sun symbol.

The game’s betting range starts at 0.15 and ends at 15, it is determined through 2 betting options that are found at the bet cell underneath the reels. They will pick the coin size as well as the number of coins on each line.

The golden logo of the pokie machine is the wild icon of this slot. This wild will substitute for all icons, with the exception of the other special icon that the pokie offers, which is the dancing couple. It will do that in order help players earn a payout.
The dancing couple is the scatter icon, which means it gives scattered pays as well as trigger the game’s free spins bonus feature. Last but not least, there is the golden sun icon that can appear stacked and would transform to any other icons during the base game, and can even stand in for the wild during free spins.