Titans of the Sun Theia 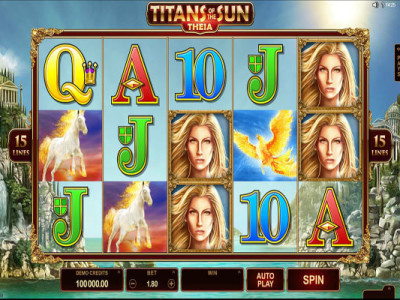 Titans of the Sun Theia Pokie

Titans of the Sun Theia is the one of the two great Greek themed video pokes that Microgaming has added to its marvelous gaming portfolio during the month of October. The game has almost the same theme and visuals, and even bonus features of its twin pokie. The exception is that in this game, players will join the same theme and story from the point of view of the Greek heroine, Theia.

Players better be prepared to join the heroine in a truly fun and an action packed gaming experience as they travel and ravage their way across the Ancient Greek lands in search for love, romance and of course, fortunes and golden treasures. Players can find the game right here for fun, so they can test out its features and what it has to offer, before placing real money bets on the slot machine at online casinos.

Titans of the Sun Theia needs no introduction, as from the moment players open the game, they will quickly notice its sharp graphics, its vivid sound effects and its theme. They will see the Greek themed symbols spinning on the reels of the game.

The game is easy to play, with every gaming option laid out to players in a simple way under the reels, which allows them to easily find what they want, and to control every aspect of the game without any hassle.

Titans of the Sun Theia is a 5 reeled game that offers fifteen bet lines that players can place their desired wagered on. Under the reels, players shall find the control panel of the pokie game that has all of the options that players will need to place their bets and control the game. There are also a few options like the sound option that are found on the top at the right side of the reels.
The game’s visuals and symbols are all affected by the Greek theme of the game. This is why players will see the phoenix, one of the legendary Greek creatures, as well as a fiery white horse, Theia the daughter of the sun, the golden sun, the logo of the game and poker card icons that represent the low paying symbols of the pokie.

The game’s betting range is the same as the twin pokie, as it varies between 0.15 and 15. This wagering range is set through the 2 betting variables that the pokie has. These variables are the number of coins as well as the value of such coins.

The wild icon that the pokie hosts is none other than the Titans of the Sun logo. It can stand in for other non special icons to help players get a reward. It will not be able to substitute for Theia, the golden sun or the scatter icon.

The scatter symbol is the romantically dancing couple which would trigger free spins and give scatter rewards. Lastly, Theia and the golden sun are the stacked transform wilds that would transform into any other icons when they land anywhere on the reels.