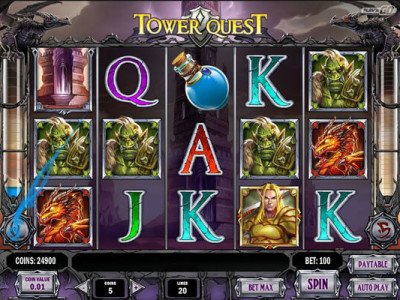 Are you a fan of Multi Player Role Playing game that takes you on wonderful gaming adventures into a fantasy land that is full of dragons, Orcs, ogres and monsters? Do you enjoy fulfilling quests and getting rewarded? If the answers to these two questions are yes, then Play n Go has just the game for you, it is this pokie, Tower Quest. The game is set in a fantasy land with legendary warriors and monsters and players will try to beat the odds and fulfill the Tower Quest, which explains the title of the game, so they can get rewarded. They will get to meet Elvin warriors, knights, Orcs, monsters, wizards and more. If that intrigues you, spin the reels of this game right here for fun and for free without any deposits or real cash involved.

Play n Go has a wide selection of casino pokies that come with interesting and high paying themes, just like this game that we have here, Tower Quest. This pokie takes players on an action packed ride into the world of Fantasy as they join mythical warriors from other worlds for a chance to fulfill the Tower Quest and get rewarded.

The game has wonderful visual that are accompanied by great sound effects that immerse players into the theme of the game to the max. So this means that when spinning the reels of the game, you are promised an exhilarating ride that is immersive and lucrative, which is to be expected since the game comes from the portfolio of Play n Go.

The game has 5 reels that have a total of 20 lines. Players would place the wanted wagers on thee lines under the reels as they go through the game’s wagering options that the game hosts. They will then spin the reels, one spin at a time, or up to 50 free spins automatically through Auto Play Feature.

The game will take players to a fantasy world that is filled with warlocks, wizards and warriors as they try to complete the tower quest in order to claim the great rewards that it has for them. The game is offered in exquisite and top notch visuals and equally amazing sound effects.

The game’s betting range varies between 0.20 and 100. This betting range is a result of the 2 betting variables that the game has. They are the number of coins, and the value of these coins.

The tower symbol is the wild icon of the game that stand in for other icons, except the bonus and the scatter potions. It can also appear stacked to cover the entire reels.

There are 2 scatter potions, the blue and the red potions. They can trigger scatter rewards and free spins with varying accompanying features depending on the number of scatters and their color. Lastly, there is the wizard bonus icon that can trigger the Tower Quest card bonus game.