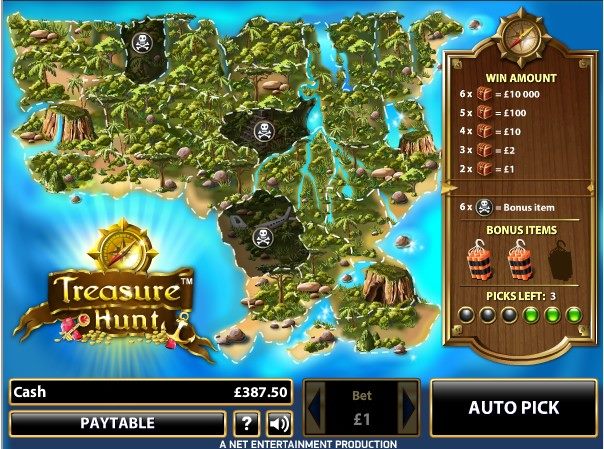 Treasure Hunt is a unique scratch card game from the gaming library of Net Entertainment so players who want to check this game for fun can do that here and they can go to Mr. Green Casino among other casinos in order to try the game with real money. The game is very rewarding and very fun, it is a scratch card game that is presented in a very unique way that separates this game from other scratch card games out there. The game is presented in wonderful graphics and a unique game play which makes the game very entertaining and rewarding at the same time. The game invites players to go on an adventure around the world in search for a wealthy treasure that will turn them into rich men. The players will also enjoy a tropical themed soundtrack that has the sound of tea ocean waves and tropical animals.

The game takes players on an adventure around the world, this is why players will see a treasure map that takes almost all of the screen. This map is divided into smaller areas. Players will also find the logo of the game at the bottom written in golden letters with a golden compass on top of it. At the bottom players will see the control panel of the game. It includes the sound settings, the help button, the paytable that shows players their odds and of course the bet that the players want to place and the buy button that they will click on in order to initiate the game.

On the right area, the players will see the paytable of the game that shows them their winnings depending on the number of treasure boxes they find and the number of bonus items that they succeeded in achieving.

The game will start as players specify their wager. They can do that at the bottom. They will choose a bet that varies between 0.10 and 10 credits per game. After that, they will click on Buy Game in order to start the game. The players will then use their mouse in order to click on 6 different small areas on the map. When they click on these areas, they will either find a death sign or a treasure box. The players who find a minimum of two treasure boxes will be able to claim a prize that depends on their wager. The more treasures boxes, the higher the prize. The amount of this prize can be seen at the paytable at the right side of the game’s screen.

If players click on six areas and they get the death sign in all of them, they will collect one bonus item, if they manage to get three of them, they will be able to activate the bonus round which is very rewarding and lucrative.