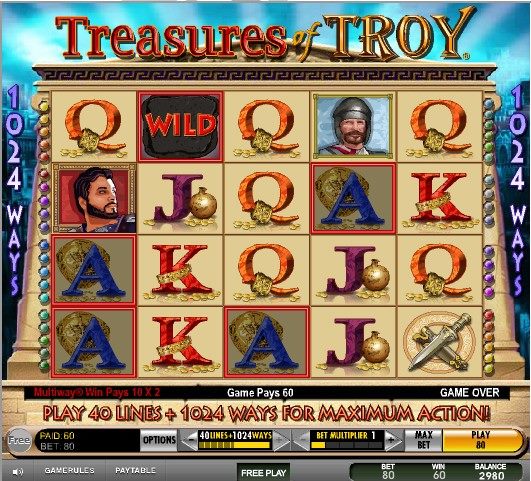 Treasures of Troy is a multi reel and multi line video slot game, it has 5 reels and forty paylines. This game allows players to indulge themselves in the well-known riches and treasures of the city of Troy. The game offers players 1024 ways to win. It has various attributes such as the Free Spins Bonus that allows players to claim a number of free spins on the game among other features.

Treasures of Troy by IGT invites all online players to go on a wild adventure into the city of Troy that is known for its treasures and riches in order to grab a part and a share of these riches. The great city of Troy that has its high walls is now up for grabs, so do not hesitate and spin the reels in order to earn great rewards. You can go to Mr. Green casino among other casinos that are powered by International Game Technology and place real money bets or you can try the game here for free. The game is distinguished by its awesome visuals and terrific audio effects and soundtrack that players will listen to while enjoying the video slot. The game also has a unique setup as it does not have any lines but it presents players with the lucrative 1024 ways to win setup. Players will also be introduced to the game’s theme by a very entertaining audio intro.

The game does not offer any winning lines as players will bet on ways to win instead of paylines. The game offers them 1024 different ways to achieve a win, which is much lucrative and rewarding that the normal payline setup. The game also has 5 spinning reels and each reel spins separately which is very visually entertaining for players. The reels are located on the grand walls of the city of Troy and the symbols that spin on these reels include Hector, Helen, the King, Axes, Swords, a Greek helm and card symbols (Q, J, K, A and 10s) and these symbols are crafted to be fitting to the theme of the game.
Under the reels, players will find the control panel of the game where they will control the game, place wagers, choosing ways, place max bet, control the sound and more. As for the paytable, it can be viewed at the gray area at the bottom next to the game rules. The game rules and the paytable will show players all of the winning combos and special bonuses that the game has in store for them.

Players will choose the number of ways that they wish to bet on alongside choosing a bet multiplier in order to place wagers. The game also allows players to bet on 40 lines besides the 1024 ways. All of this makes for a great rewarding game. The minimum bet that can be placed at this game is equal 1 while the biggest one is equal 400 per spin.

IGT is known for offering its players plenty of rewarding features and bonus symbols and this game offers exactly that. All of these rewarding symbols and features will help players enjoy a very rewarding gambling experience. The Treasure of Troy symbol is wild and it can replace any other symbol on any line in order to create a winning combo. As for the Horse of Troy, it is the scatter symbol that rewards players through free spins. 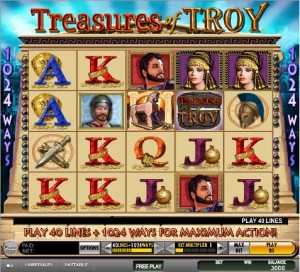 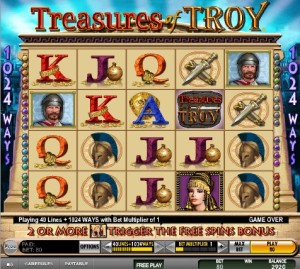 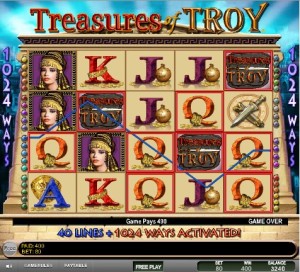